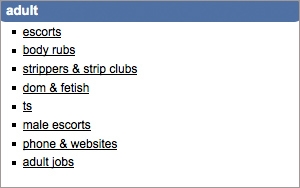 A federal judge in Boston has dismissed a lawsuit accusing Backpage.com of facilitating sex trafficking through the design of its online classifieds site.

“Congress has made the determination that the balance between suppression of trafficking and freedom of expression should be struck in favor of the latter in so far as the Internet is concerned,” Stearns wrote in a 34-page ruling issued late last week. “Putting aside the moral judgment that one might pass on Backpage’s business practices, this court has no choice but to adhere to the law that Congress has seen fit to enact.”

The ruling stems from a lawsuit filed in October 2014, when three individuals who say they were sold for sex on Backpage.com sued the company.

Two of the plaintiffs are still teens, while the third is now 20 years old. They allege that Backpage (along with related companies Camarillo Holdings and New Times Media) violated a host of laws, including federal and state laws against sex trafficking and a state law against unfair and deceptive conduct.

Backpage, which has prevailed in at least one similar prior case, successfully argued that it wasn't responsible for crimes committed by users of its service.

The Electronic Frontier Foundation and other digital rights advocates urged Stearns to accept Backpage's argument. “If online service providers were required to engage in protracted and expensive litigation whenever plaintiffs alleged that they were harmed by user-generated content hosted or transmitted by intermediaries, these online platforms for users’ speech would inevitably become more expensive, more restrictive, and ultimately less available for individual expression,” the EFF, Center for Democracy & Technology and Santa Clara University law professor Eric Goldman argued in a friend-of-the-court brief filed earlier this year.