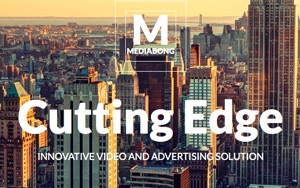 Mediabong is growing like a weed: The Paris-based contextual video ad network announced that it has raised $5 million in a new round of funding in order to expand to the United States.

The latest round of funding was led by two European funds, Entrepreneur Venture and Conegliano Venture, both of which already have active businesses in the U.S.

The funds will help Mediabong bring its SyncRoll service to market in the U.S. and elsewhere. SyncRoll will provide publishers and advertisers with a mobile video ad format that engages users by delivering ad messages based on the context, with algorithms analyzing factors including user psychology, semantic profiling and performance.

Advertisers using SyncRoll can place video ads in-line, which then “jump” to the end of the frame when the user scrolls down and continue playing. In addition, Mediabong offers Floating Ad Units, which keep the ad unit in the frame as the user scrolls.

Mediabong Chief Operating Officer Priyesh Patel touted the company’s guarantee for viewability: “When we don't achieve the metrics that are set out by our advertisers, we simply do not charge them.” Mediabong has already worked with publishers including Newsweek, CBS, Reuters, AFP, and the Associated Press, and ad clients including Land Rover, L'Oreal, and Unilever.

Mediabong’s U.S. expansion comes amid growing concern about video ad viewability. Last week, Google disclosed that 46% of online video ads were unseen, based on the company’s own delivery video ads on the Web (not including ads on YouTube). The study used the definition of viewability accepted by the Media Rating Council, which calls for at least two seconds of video to play while at least half of the ad is in the screen.