Sales Coming Up Roses For The Home Depot 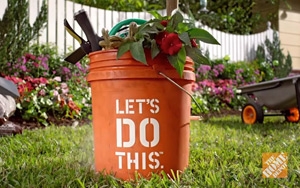 Between a busier real-estate market and homeowners eager to put an end to an ugly winter, business is blooming at the Home Depot.

The home-improvement giant posted financial results ahead of expectations, with sales for the fiscal first-quarter rising to $20.9 billion, including a 6.1% increase in same-store sales. U.S. results were even stronger, with comparable sales climbing 7.1%. Net earnings rose to $1.6 billion, from $1.4 billion in the same period a year ago. And it raised its financial forecasts for the remainder of the year, with same-store results now expected to advance between 4 and 4.6%.

"We had a stronger-than-expected start to the year as we experienced a more normal spring across much of the country and continued recovery of the U.S. housing market," CEO Craig Menear says in its release.

While the results include $7 million related to its large data breach, it says it is still unable to fully estimate the total damage.

Like most retailers, the Atlanta-based chain has been pushing its e-commerce efforts as well -- and earlier this spring, it announced integrated shopping features that include a big push toward in-store pickup. (Last year, it says, shoppers picked up almost 40% of all online orders in their local store.) It’s also expanding mobile efforts, including an in-store app that steers shoppers straight to where products are shelved, through text or voice-enabled search. And smartphone-enabled catalogs are also available, which it says extends in-store aisles, connecting people to product options available online

And as parts of its sixth annual Spring Black Friday, it created an extensive landing page with specific DIY solutions, including a Garden Club tailored to 15 different regions, and three new online tools: A mulch and topsoil calculator, a weed, plant and pest problem solver, and a grass seed calculator.