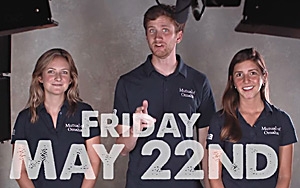 Mutual of Omaha is asking consumers to vote on the  city that should be the insurance company’s 20th tour stop as it sets out on the road this summer.

The Aha Moment Tour takes a 34-foot Airstream customized as a mobile television studio around the country capturing local “aha” moments of inspiration and change. One will be turned into a national TV ad for the Omaha, Neb.-based company.

From now until May 22, consumers can vote on the Aha Moment Tour Facebook page or this link for either Santa Cruz, Calif., New Orleans, St. Louis, Las Vegas or Dallas.

The company has created a 60-second online video to promote the contest via social media. Mutual of Omaha's Aha Moment campaign includes national commercials, a website devoted to aha moments and a robust online community via Facebook, Twitter, Instagram and other social networks. The stories collected over the coming months will also be shared at mutualofomaha.com/aha.

The Aha Moment Tour will end this year in the chosen city on Aug. 6-7.

"The Aha Moment Tour has grown tremendously in social media engagement,” says  John Hildenbiddle, senior vice president of brand management and public relations for Mutual of Omaha, in a release. “As we looked ahead to the sixth Aha Moment Tour, we thought it would be fun to take advantage of that growth and ask the public to decide where we should end this year's Tour.”

The 2015 Aha Moment Tour kicked off in Irvine, Calif., May 4 and will visit 20 cities in 20 states. Participants share their personal aha moments inside the 34-foot Airstream-turned-mobile television studio at each tour stop. Exact tour stop locations in each city and more details can be found at ahamoment.com/tour.