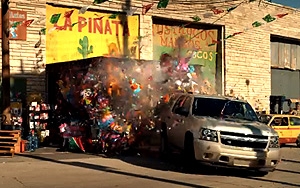 Bridgestone Americas has launched parallel campaigns for its Firestone brand. The first shines a spotlight on Firestone Complete Auto Care, and its Firestone auto technicians. The second puts air in Firestone's truck tires.

Both campaigns go for a humorous approach, unusual for a market sector that tends to stick pretty well to the left-brain appeal to deals, product attributes and some variation of “friendly service and expertise.” Bridgestone's campaign for Firestone Complete Auto Care plays on consumer fads that make old school hip, and show how Firestone has been doing that forever.

Said Philip Dobbs, CMO, Bridgestone Americas, in a statement: “The new spots remind people of the skill of our ASE-certified technicians at Firestone Complete Auto Care, and what’s possible when they use their trucks as they’re intended; as heavy-duty, adventure-seeking vehicles.”

Another ad plays on a similar cultural landmark of dubious distinction: our love of the work shirt, for which we pay dearly, especially if it's (pre) torn, and stained. It asks how people spend $30 on vintage work shirts. The spot jests that the more than 4,000 ASE-certified auto technicians at Firestone Complete Auto Care are flattered — since, after all, they have been working with their hands since 1926.

For Firestone tires the focus is trucks. The effort, “Do Truck Stuff,” is also a humorous look at consumers. In one TV spot a guy named Lee gets inspired to actually use his truck for what it can do — mud bogging, crushing a toy car like a monster truck, and finding the perfect secret fishing spot —which he can do because he has Destination A/T tires. In another spot, “Ann’s Epic Errand,” we have Ann in an SUV, who admires a woman in a monster truck, and decides to go extreme in her trips around town to do shopping.

Besides national TV, the campaign includes radio and digital elements, plus social activations.