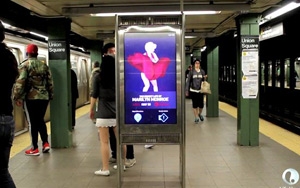 On May 30 and 31, Lifetime is premiering "The Secret Life of Marilyn Monroe," a new miniseries based on the best-selling novel of the same name.

"We were looking for a unique way to engage our viewers and test new technologies beyond just static OOH," says Tracy Lenhart, VP consumer marketing, Lifetime. She describes the ‘Marilyn’ OOH effort as a “never-been-done-before placement in the U.S. that shouts 'premium and popular,' and makes people stop and take notice."

The creative features audio-triggered 15-second video spots of Kelli Garner, who portrays Marilyn in the miniseries, wearing a skirt that flies up — reminiscent of Monroe’s film “The Seven Year Itch” — every time a subway arrives and departs each station.  Another spot, for use on off-platform subway station screens, features the actress smiling and flirting with those walking by. A spot can be seen here.

"As with any groundbreaking initiative, it took a collective effort and many hours to get the campaign off the ground in time to support the mini-series," says Lenhart. "For this particular project, the technology is new for the market so there were several rounds of testing, both off and on site, to ensure the technology functioned properly and ultimately achieved vision."

The OOH campaign will be live for three weeks leading up to the mini-series premiere on May 30 and 31.

Lifetime is part of the A+E Networks, which is a joint venture of the Disney-ABC Television Group and Hearst Corporation. Horizon has worked with Lifetime for five years.