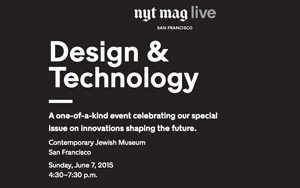 Close on the heels of a major revamp for its print and digital products, The New York Times Magazine is jumping into the event business with the announcement of the first NYT Mag Live event, scheduled for June 7 in San Francisco.

It is the inaugural event in an ongoing series, bringing together NYT Magazine editors and writers with innovators from the worlds of culture, technology, art and design.

The first event will explore how Silicon Valley is transforming design, with Editor in Chief Jake Silverstein joined by guests, including Mike Krieger, the co-founder of Instagram, Jalak Jobanputra, a founding partner of FuturePerfect Ventures, and Stefan Thomas, chief technology officer at Ripple, along with a number of senior editors and writers from the magazine.

The event, which will be held at the Contemporary Jewish Museum in San Francisco, is timed to coincide with a special issue of the magazine devoted to design and technology, due out the same day.

After the event, there will be a networking cocktail reception, when the magazine staffers and guests will be available for a question-and-answer session.

NYT Mag Live is part of NYT Live, the newspaper’s broader conference and live event business. The magazine event series is sponsored in part by eBay.

As noted, the magazine section underwent a major redesign unveiled back in February, with a new graphic treatment and layout emphasizing clean lines and more photography, as well as new fonts and a redrawn logo. On the editorial side, the magazine debuted a number of new weekly features and columns.

The mag’s digital presence also got an overhaul, with increased emphasis on photography, video and interactive elements, more attention to design in online feature stories and added daily content.

On the advertising side, the site now offers full bleed banner ad formats for high-profile premium placements. Advertisers can also sponsor entire digital issues of the magazine on NYTimes.com.