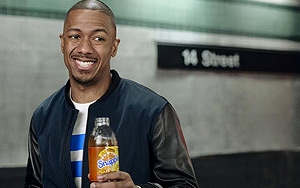 Earlier this year, Snapple, which is keenly aware that its fans are its best salespeople, asked some from its hometown, New York, to share their love of the brand with the rest of the country.

Several New Yorkers who are proud Snapple fanatics were chosen to be featured in the brand’s 2015 ad campaign, including national TV spots that are currently airing (and viewable on YouTube).

Now, to help drive sales during its peak summer season, the brand is employing celebrities and social media — including a Tumblr hub — to encourage the whole country to use #LOVESNAPPLE to share why they love the brand.

"America's Got Talent" host Nick Cannon (shown) is starring in video ads that spur fans to participate in the sharing. Cannon is shown talking to New Yorkers who are Snapple fans, including a female ventriloquist performing in the subway system. Tagline: "New Yorkers love Snapple, and you're gonna love it, too."

In addition, Jimmy Fallon did a paid segment on "The Tonight Show" in which he argued with a (planted) guy in the audience about who loves Snapple the most.

The campaign, including Cannon's video ads and Fallon's on-air segment, are being promoted on Snapple's own social media channels, and the brand has created a Tumblr page where all of the #LOVESNAPPLE posts are being aggregated. The page also includes links for easy sharing.

No prizes or other incentives are being offered for participating in the sharing, at least to date.

"We love how passionate New Yorkers are about our brand, and are excited for the rest of the country to join Snapple and Nick Cannon in sharing their love online with #LOVESNAPPLE,” said Snapple director of marketing Brent Chism.