Digital, Be Darned; Auto Salespeople Are The Key To The Deal 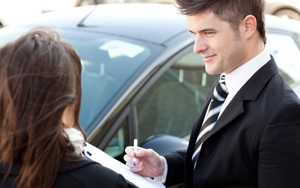 Car dealership salespeople can officially say that reports of their death are exaggerated. Yes, third-party car research sites, OEM sites, social media, and myriad other digital channels have created a customer who often comes into the showroom check in hand and finger pointing at that car right there. But the salesperson is a critical catalyst, according to new data from J.D. Power & Associates.

The salesperson is nothing less than ambassador from the brand, and a negotiator, educator and facilitator to boot -- especially negotiator. In the firm's PowerRater Consumer Pulse report for May, 46% of U.S. new-vehicle buyers said this title is the most important in the purchase process when it comes to helping the customer get the best deal.

The report, a monthly analysis developed jointly by J.D. Power and DealerRater, is based on J.D. Power’s customer satisfaction research and DealerRater’s customer ratings and reviews of car dealerships. As a negotiator, the salesperson’s role is to "assist buyers in arriving at a mutually acceptable deal," per the study. That role includes shaking hands on both the new vehicle’s price and the value of the buyer’s trade-in vehicle. The firm's 2014 U.S. Sales Satisfaction Index Study found that 66% of new-vehicle buyers said they negotiated with their salesperson to get a better deal.

“Given that people so often turn to the Internet and smartphone apps to research vehicles — and can even see what others have paid for a similarly spec’d vehicle — the results of our analysis were somewhat surprising, but it’s clear that consumers still want salespeople to be part of the overall purchase process,” said Gary Tucker, chief executive officer of DealerRater.

J.D. Power's sales satisfaction study from last year found that 55% of customers negotiated for a lower price and 32% for a better trade-in value.

Gen Y buyers negotiate the vehicle price 72% of the time, while Pre-Boomers negotiate only 61% of the time. Gen X negotiates 66% of the time and Boomers 64% of the time, per Chris Sutton, VP, U.S. automotive retail practice at J.D. Power. “In an increasingly digital world where everything’s at our fingertips, savvier consumers are armed with a lot more information to bring into a negotiation than was readily available in past generations,” he said in a statement.