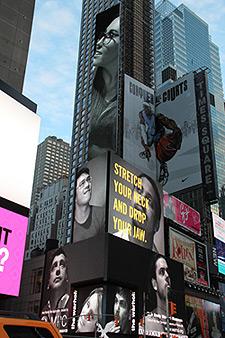 Organized by The Andy Warhol Museum and designed by creative agency Marc USA, every night in May at 11:47 p.m., a billboard in Times Square airs images from 10 rare Andy Warhol screen tests.

Between 1964 and 1966, Warhol created almost 500, three-minute film portraits of famous and anonymous visitors to his studio.

During the 1960s, these films were seldom shown in public, but were often shown at his studio, The Factory. Now, among the Warhol Screen Tests to be shown are those of Bob Dylan, Allen Ginsberg, Lou Reed, Harry Smith, and Edie Sedgwick. Here is a link to a video.

To raise awareness of these clips, Marc developed "stretch your neck" images that show clips of people looking up at the other Times Squares screens. These people — all Marc employees — are shown in 60-second bursts that appear twice every hour on the Times Square display.

“In a city where everyone is always rushing by, we believe that striking images of people looking to the sky would inspire viewers to return to watch the three-minute films just before midnight,” explained Marc USA creative director Josh Blasingame. “We shot individual clips of 13 members of our staff — giving each his or her ‘15 minutes of fame’ in a direct homage to Andy Warhol and the Screen Test series.”

This installation is a Pittsburgh-influenced effort. Warhol was from the region and his museum is located there. American Eagle Outfitters (AEO), which donated the use of its Times Square display, is headquartered in Pittsburgh.

Marc has been doing the advertising for the Warhol Museum for over five years, on a pro-bono basis. The CEO of Marc USA, Michele Fabrizi serves as the chairman of the board of directors of the Warhol Museum.