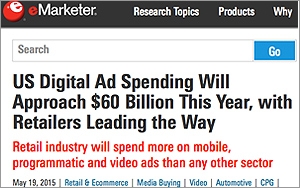 This year, the U.S. retail industry will spend $3.71 billion to purchase digital display ads programmatically -- nearly a quarter (24.9%) of the $14.88 billion U.S. advertisers will spend on programmatic buys, according to a new report from eMarketer.

The CPG and consumer products category is the second-largest sector for programmatic buying, and 63% of digital display ads among advertisers in that industry are purchased programmatically, eMarketer reports.

With more than $2 billion in programmatic spending, this year, CPG will account for 14.1% of all programmatic display dollars -- compared to only 8.5% share of digital advertising overall.

Among shifts by other industry leaders, Procter & Gamble announced last year that it would dedicate 70% of its digital ad budget to be purchased programmatically.

Overall, digital ad spending in the U.S. will total $58.61 billion this year, according to eMarketer.

Retailers' ad outlays will comprise 22% of that figure -- or $12.91 billion -- by far outpacing all other U.S. industries. Advertisers in the automotive business will spend $7.30 billion on digital advertising, this year -- the second-largest sector at 12.5% of the US market.

On the mobile front, retailers will spend nearly twice as much as any other industry, this year, eMarketer expects. The sector's $6.65 billion will represent 23.2% of the $28.72 billion that advertisers in the U.S. will spend to reach consumers on mobile devices.

eMarketer’s report is based on analysis of hundreds of data sources as well as interviews with executives at ad agencies, brands and digital ad sellers.