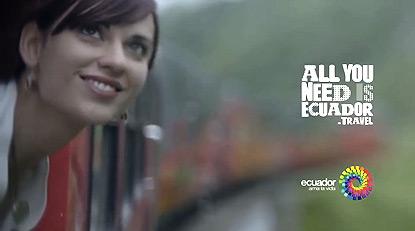 Ecuador’s official tourism organization is launching the second phase of its “All You Need Is Ecuador” campaign, an effort that included the first-ever foreign-sponsored Super Bowl ad, a $3.8 million gambit in this year’s game. The organization is committing $9 million of a $28 million global budget to an integrated marketing campaign in the U.S., including TV, print, online, and public events in New York, Massachusetts, Connecticut, Florida, and California kicking off next month.

The message is that Ecuador, with its plethora of topographies, people, climates and experiences all packed into a small geographic cornucopia (you can visit the Amazon, the Andes, the coast and, conceivably, the Galapagos islands in one day) lets you get in touch with yourself by getting away from everything you know.

The country’s tourism minister, Sandra Naranjo, tells Marketing Daily that while the Super Bowl spot for Ecuador was a big awareness builder, it needed to be sustained. “The market needs strong signals that are constant,” she says. “We needed to evolve that message.”

The campaign includes a social content program in which Ecuador is inviting artists, filmmakers and singers to visit and enlarge upon their journey through their channels and Ecuador's digital tourism website. “The opportunity that digital gives you is to be very targeted. It is more efficient. We had 62 million see the Super Bowl, but complementing that with digital doubles the number of people who will see the work,” says Naranjo.

She adds that the effort, via McCann-Erickson, includes teasers this month and activations beginning in the next two weeks with other elements of the campaign, including TV, launching in mid-June.

The country has also been working on B-to-B programs. Naranjo explains that the country started last year working with the endemic trade press to prime the tourism pump by getting guides and agents to create tour packages. “We worked with them before the Super Bowl campaign to tell them what we are doing so that tour operators had special packages for Ecuador tourism already in place.” With airlines, she says, the country worked on increasing frequency and capacity, with airlines like American offering increased flights direct to Quito from hubs like Houston. JetBlue announced it will begin once-daily flights between Ft. Lauderdale and Quito starting in the first quarter next year.

While the top nations of origin for Ecuador tourism are neighbors like Colombia and Peru, the fastest-growing markets are the U.K., Canada and Germany. “Last year we had around 260,000 Americans come,” she says, adding that Ecuador now has more connections with the U.S. than with other South American countries. “We have direct flights now to Miami, Houston, Dallas and New York.” The organization says it is counting on the campaign to double the annual income from tourism by 2020 from $1.5 billion to $3 billion. For the U.S., Ecuador projects 7% growth in U.S. travelers this year and a $350 million foreign investment in its tourism between 2014 and 2016.

Naranjo says retired people who have money and time to spend and are looking for new destinations — travelers who want four vacations in one; young, adventurous people; and people looking for a quick vacation are key visitor demographics. The country's tourism arm says inbound tourism to Ecuador grew by 14.4% last year, outpacing the global average tourism growth over the last four years.

“I think our main strength is that we are the only country where you can have it all in one place. Peru has the Amazon, for example, but if you go to the Amazon in Peru the distances are vast. It is difficult to get anywhere else. In Ecuador, you could have breakfast in the Amazon, lunch under a tree in Quito, and drive an hour north to the province of the lakes. Then drive an hour to the volcanoes. We are  also not seasonal. It's the land of eternal spring.”