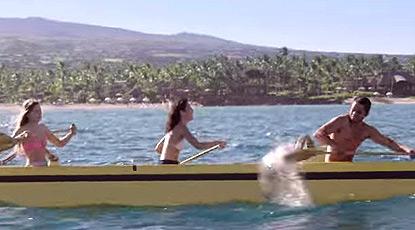 Yes, even the Hawaiian Islands have to compete for tourists.

While relatively few destinations can boast both spectacular natural beauty and warm, sunny weather more or less year-round, the islands' remote location means that for North Americans, traveling there can be pricier than directly competitive destinations like the Caribbean and Mexico.

"Cost is a major challenge," said Jay Talwar, CMO for the Hawaii Visitors and Convention Bureau (HVCB), which handles marketing for the North American market, during a Hawaii Tourism Authority presentation in March. About 40% of North Americans who have never visited Hawaii abandon the online booking path along the way because of airfare, hotel or vacation package price reasons, he reported.

Hawaii attracted 8.3 million visitors in 2014, up 1.3% year-over-year. Still, out of a North American universe of 26 million travelers, about a third have yet to visit Hawaii, reported Talwar. The 2015 campaign is specifically focused on converting more of those "never beens."

The islands already have exceptionally high repeat-visitor rates; in fact, the enthusiasm of those who have already vacationed there is one of HVCB's biggest strategic advantages.

Fully 98% of North Americans who have visited the islands report being highly satisfied, and 99% say that they would recommend a Hawaiian vacation to friends and family. And as with most types of consumer decisions, research shows that the recommendations of friends and family are the biggest influences on vacation destination choices.

Also key to HVCB's strategy: The islands' core target prospects are people in their late 30s and early 40s, living in cities such as Los Angeles, Chicago and Boston, who travel for vacation by plane at least once a year and — importantly — are seeking to have unique experiences, as well as see the most famous attractions of any given destination. For instance, in Italy, they will visit the museums and ruins, but also wander Florence or Rome without a specific destination in mind, to get a better sense of residents' day-to-day lives and culture, perhaps enjoying local food and buying artisanal goods along the way.

Those unplanned experiences "are the stories that these travelers will tell their friends when they go home," said Talwar. So conveying the wealth of memorable experiences "that can't be had anywhere but in Hawaii" is crucial in convincing potential visitors that the costs are more than worth it (the "value equation"), he explained.

HVCB's research shows that "never beens" think that they know Hawaii, but they really don't: There's much more to the islands than they realize, he stressed.

It's not surprising, then, that social media are the bedrock of this year's campaign, called #LetHawaiiHappen.

Developed with the help of more than 100 partners across the six Hawaiian islands, the campaign combines the power of influencers and video and still imagery to tell real stories about memorable, often unexpected, Hawaiian experiences.

HVCB, which has an annual budget of $25 million and roughly 3 million followers across its social channels, last December chose Boston-based Shift Communications to manage its social media push, including working with influencers and developing and aggregating content.

The team identified more than 20 important Hawaii fans who were classified as social influencers, advocates or ambassadors. Some are residents of the islands; some are residents of the target North American prospect markets. The marketers worked closely with this group. Some were brought back to the islands to refresh their excitement about the destination and enable them to create fresh video and other content.

The team is also employing a user-generated content aggregator program to help track and categorize video and other content — a particular challenge because of the huge amount of digital content about Hawaii, and the need to be able to correctly identify and employ appropriate content from each of the six islands. The program also helps ensure that usage rights are obtained for user-generated and third-party content, Talwar noted, although he added that the overall content-aggregation job "is not all automated — it still requires a lot of hands-on work."

Within nine weeks after the social initiatives kicked off in January, they had generated more than 28 million social impressions and more than 1.3 million video views, Talwar reported. (As of May 22, the #LetHawaiiHappen Instagram page is showing nearly 25,000 posts.)

Noting that research shows that fully 71% of searches on YouTube are for destination names, Talwar said that HVCB considers video views to be a particularly critical metric. "Producing and incorporating more and more video on our social channels, and working with influencers to create it, are a major focus for us," he said.

The campaign also includes some paid advertising and takeovers on social channels.

In addition, professionally produced videos are being shown on The Travel Channel and HGTV, and featured on HVCB's social channels, including YouTube.com/GoHawaiiTV.

These videos portray the types of adventures that might occur on specific islands. For instance, in one, two women get lost on the Big Island of Hawaii and end up having a spontaneous outrigger canoe adventure; in another, a lone traveler meets friendly fellow vacationers and the group enjoys local hospitality at a backyard fundraiser on Kauai; and in a third, a couple honeymooning on Maui cavort, fully clothed, in a waterfall-fed natural pool that they come upon after their car runs out of gas.

Print ads in travel, food and other targeted magazines include one format in which professional shots of two different locations are at top and bottom, with a user-generated photo in between. A spread ad in Condé Nast Traveler featured a local tastemaker's observations about a Hawaiian venue.

The revamped Hawaiian Islands Web site, which has a separate landing page for each of the islands, is also designed to highlight the "let Hawaii happen" theme. One feature enables users to select starting and ending locations on a map and view user-generated videos and content about various stops along the way.

The tourism board has a decade-long promotional relationship with The Golf Channel, in which commentators for PGA tournaments held in Hawaii incorporate footage and information about the destination during television coverage. The goal isn't as much to attract amateur golfers to Hawaii as to take advantage of the fact that PGA tournament viewers are "smack in the middle of our target audience," explained Talwar. These days, well-known golfers sometimes ask to be included in these placements just to enhance their own "brands," he added.

The tourism board also jumps on special opportunities, like working with the producers of "The Biggest Loser" to highlight Kauai when two of the series' episodes were filmed on the island in December.