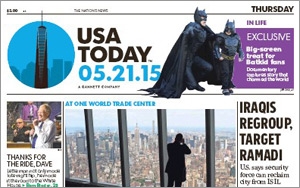 USA Today may cease publishing a daily print edition within the next five or six years, according to Editor in Chief David Callaway, who made the remarks Wednesday during a panel discussion about the “Future of Media,” part of the Internet Week conference. However, he added that the newspaper will continue publishing some sort of print product for years to come.

Owner Gannett is in the midst of spinning off USA Today and the rest of its newspaper division, in order to focus on its more profitable broadcast TV properties. A number of other big publishers have already done something similar, including Tribune Co., E.W. Scripps, and Journal Communications.

If USA Today were to shutter its daily print edition, it would become the second major U.S. newspaper to go online only, following the Seattle Post-Intelligencer, which went all digital with drastic personnel cuts in 2009.

Other newspapers have cut back their publishing schedules, including The Detroit News and Detroit Free Press and the New Orleans Times-Picayune, while others have simply closed altogether, including the New York Sun and Rocky Mountain News.

Callaway’s prediction follows a series of print circulation declines for USA Today, one of the country’s few truly national newspapers, along with The New York Times and The Wall Street Journal. Over the last decade, USA Today’s average weekday print circulation fell by half, from 2.22 million in the six-month period ending September 2004 to 1.08 million for the same period in September 2014, according to the Alliance for Audited Media, previously known as the Audit Bureau of Circulations.

The newspaper's total average weekday digital circulation soared to around 1.4 million, including readers of its digital editions, Web site and apps. Like many newspapers, the bulk of its digital audience now comes from mobile, with 24 million monthly unique visitors to its mobile app and Web site.

Although the stand-alone daily print edition may eventually fold, the USA Today brand will live on in print in the form of special inserts in Gannett’s community newspapers, which increasingly rely on USA Today for national and international reporting. It closed its weekend magazine insert for newspapers, USA Weekend, in December 2014.