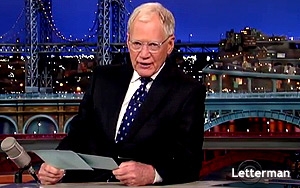 David Letterman pretty much ended up where he started on CBS with big TV ratings, dominating all late-night TV and pulling in many entertainment advertisers along the way.

His last effort hosting CBS’ “Late Show with David Letterman” pulled in the best results in over 20 years (since February 1994) -- averaging 13.76 million viewers, according to Nielsen preliminary ratings. It easily bested all late night competitors.

“Late Show” started up in August 1993, debuting with 23 million viewers. It dominated late-night TV for two years until 1995, when “The Tonight Show with Jay Leno” became No. 1 in the daypart. Before “Late Show” Letterman hosted NBC’s “Late Night” running from 1982 to 1993.

Those advertisers benefiting from the big results of the Letterman’s last show included many theatrical movies and TV shows.