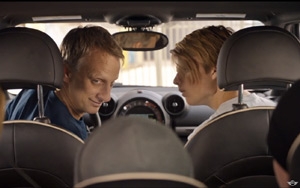 When he's not driving a skateboard, Tony Hawk is driving a Mini Countryman. It's his family car, and he demonstrates what that means in a new campaign for Mini U.S.A. It is the first effort by Mini to promote the Countryman, the brand's largest vehicle, as a family vehicle, and it's the first time Tony Hawk has done a TV spot for Mini.

The spot, in which Hawk takes his kids on an unusual day trip to an abandoned water park, suggests that the Countryman makes the more traditional crossover seem about as pulse-quickening as a minivan. The effort includes a long and short version of the TV ad, and a raft of supporting digital, including a behind-the-scenes video about how Mini and its agency, Sausalito, Calif.-based Butler, Shine, Stern & Partners, shot the spot.

Hawk isn’t new to Mini. He has been doing projects with the BMW unit in the U.S. since 2013, but until now his involvement with the brand has been participating in events and starring in viral videos. In one, he jumped over a Mini John Cooper Works Hardtop coming at him at 30 mph. Last year, he paired with French rally driver Guerlain Chicherit to do an urban race sequence, with Hawk on his skateboard versus Chicherit in a Mini Hardtop.

Lee Nadler, marketing communications manager at Mini U.S.A., says promoting the Countryman as a family vehicle is a first for Mini. “We wanted to continue to look at ways to share that [the Countryman] is not only practical, but fun. A big issue with bigger, practical family vehicles is that you can lose that.”

In the spot, Hawk is driving his kids down a desert highway in the Mini Countryman Park Lane edition. The kids think they're going to a water park, the kind with water. But Hawk suddenly veers off the highway onto a desert road, past a decrepit billboard for a water park. He pulls into the parking lot for the clearly abandoned facility, and pulls out skateboards. Off they go, skating the old water slides and runs. The highlight of the ad is Hawk doing a jump from a ramp over an empty water sluice, in which his kids are skating. The voiceover says, “Take your family on a road trip less ordinary. The surprisingly spacious Mini Countryman.” Says Nadler, “We are seeing more and more families buying Countryman. And Mini owners have a sense of adventure, and want to do things spontaneously.”

He says the media commitment is “a big buy for us. In the past with Tony, we had been doing a lot of these online.” But even the online portion is bigger this time, including a masthead takeover of YouTube.com, and large online distribution, per Nadler. The TV ad kicked off on Monday with the NBA Western finals. The video content is also posted on Miniusa.com, and sites like The Ride Channel, focused on skating and an active lifestyle.

The Park Lane edition Countryman featured in the spot is a premium trim of the vehicle, with unique interior, paint, body color and wheels. “What we are showing is that you don't have to sacrifice at all when you buy a Mini Countryman as a family vehicle. The premium nature [of the car] is something that will pleasantly surprise people who will come into brand for the first time.”