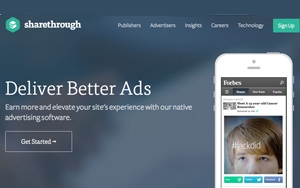 Native advertising platforms have been moving to address advertiser demands for more accountability around issues like ad visibility and user engagement. To that end, Sharethrough and Nudge Analytics have unveiled a partnership that will give Sharethrough’s publishing partners access to Nudge’s analytics for audience attention to sponsored content on their Web sites and apps.

Through the partnership, Nudge will provide publishers with data about user engagement after they click on sponsored content, including the length of time that users spend actively engaging with the content, as well as how far down the page they scrolled, and how long it took to get there.

The active time spent, or “attention minutes,” is defined as the amount of time in which the sponsored content is given priority for viewing -- for example, as the top open browser window when multiple windows have been opened.

Chris Schreiber, Sharethrough’s vice president of marketing and communications, explained: “We want to understand the different level of attention produced by different parts of sponsored content -- not just what headlines are working but how the readers engage with the content itself.”

Nudge CEO Ben Young gave an example of how publishers and advertisers might use the data: “Often a brand wants to include a YouTube video in the content, and if they can figure out where the attention starts to fall off for a particular piece of content, that helps them find the right spot to make sure they see the video.”

Young noted that Nudge’s clients have typically been able to increase their total reach by 15% with a few tweaks, based on Nudge data. On the sales side, Schreiber added that publishers could start crafting media deals incorporating Nudge analytics to guarantee engagement, if they wish.

As noted, native ad platforms and technology providers are offering publishers and advertisers new metrics and analytics to give a more detailed picture of how users interact with native ad content. Last month, Nativo announced it is partnering with Moat to provide third-party verification of viewability for brand advertisers. (Nativo already measured viewability and has always transacted CPMs on that basis.)

Nativo and Moat are also providing engagement metrics and analytics including tracking on scroll initiation and scroll depth, among other measures.

Last year, native ad provider inPowered promised engagement for native ad content delivered with its platform. The inPowered platform, which creates native ads using editorial content from third-party publishers (review sites, enthusiast blogs, and the like), offers guaranteed engagement, defined as the proportion of viewers who clicked and spent at least 15 seconds or shared it online.