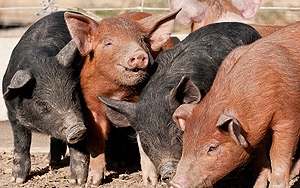 While Walmart has never been accused of being a grocery trendsetter, the retailer took a giant step toward Whole Foods-style marketing, announcing a major shift in its positions on animal welfare and antibiotic use in farm animals.

Observers say it’s an acknowledgement that opinions about humane farming practices — once a topic for elitist foodies and fringy animal-rights groups — are rapidly becoming mainstream. And despite Walmart’s commitment to “everyday low prices,” it’s also an indication that the retailer is increasingly sensitive to the quality demands of Millennial shoppers.

The Bentonville, Ark.-based retailer announced it now supports the “Five Freedoms,” a set of guidelines that animal-rights activists have been clamoring for since the mid-1960s, asking suppliers to ensure animals are raised and slaughtered in a way that gives them freedom from hunger and thirst; discomfort; pain, injury or disease; to express most normal behavior, and from fear and distress.

Walmart is also requiring the responsible use of antibiotics, limiting treatment to animals that are either ill or at risk, and includes more transparency in the reporting of such drugs.

“Our customers want to know more about how their food is grown and raised, and where it comes from,” says Kathleen McLaughlin, the company’s SVP, sustainability, in its announcement. “We believe it’s important to promote transparency in this process, helping to put our customers in charge of their food choices by providing clear, accurate information about food ingredients.”

The Humane Society of the U.S. says Walmart’s decision is “a remarkable inflection point,” and that since the chain sells America 25% of its groceries, “there’s no greater agent of change within our country’s food system,” writes Wayne Pacelle, its president, in a blog post.

“Precisely because it’s Walmart, this is the most definitive statement yet that the era of confining farm animals in cages will come to an end,” he says. “We applaud the company for adopting a comprehensive animal welfare policy, which comes on the heels of dozens of other declarations and pledges from other major food retailers against gestation crates, battery cages, and tail docking of dairy cows.”

A just-released Gallup Poll reports that 54% of Americans say they are somewhat concerned about how chickens, cows and pigs are treated, and 26% very concerned.

But cost continues to be an issue, particularly for the tens of millions of shoppers who choose Walmart for its rock-bottom prices. A recent survey from the American Humane Association, for example, found that while 76% of people who say they are concerned about farming practices are willing to pay more for humanely raised eggs, meat, and dairy products, 36% say they can’t find them, and 19% say they are too expensive.

While Whole Foods Markets has been a pioneer in its standards for suppliers, other retailers, including Sobey’s, Safeway, Haggen, D’Agostino and Harris Teeter have all been singled out by Certified Humane.