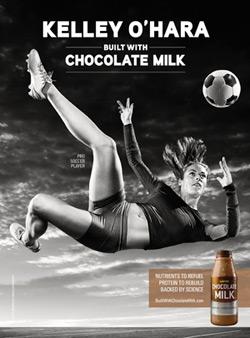 Timed to coincide with June's Women's World Cup soccer tournament, Kelley O'Hara, a star from the U.S. team, is the latest athlete to be featured in the "Built With Chocolate Milk" campaign.

The Milk Processor Education Program (MilkPEP) launched the campaign in November 2013, to drive awareness of research that shows that drinking low-fat chocolate milk after strenuous exercise helps athletes refuel and rebuild their bodies.

The original version featured athletes from the Team USA Women's Ski Jumping and Hockey teams, including content about how they were using chocolate milk in preparing to compete in the February 2014 Sochi Olympics. Other athletes who have participated in the campaign include professional basketball player Kevin Love and Ironman Triathlon champions Mirinda Carfrae, Craig Alexander and Luke McKenzie.

The new creative features footage of O'Hara working out and in action on the field, followed by a pause for chocolate milk-driven recovery.

The TV creative and videos, including behind-the-scenes footage, are being featured on the campaign's Web Site and social media (the social channels encourage sharing with the hashtag #BuildIt). O'Hara is promoting the messaging and videos on her social media channels, as well. The campaign also includes print (example shown) and digital advertising.