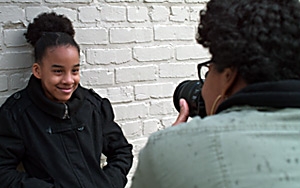 With the tagline of “Together we’ll go far,” Wells Fargo has been depicting the purpose behind people’s passions. This week, the company — which has touted its “total market” approach and consciously has been including more diversity in its advertising — is launching a campaign to tell the passions and purpose of prominent African Americans.

To get the message out, the bank is using Using Radio One’s and its One Solution marketing arm (which uses the company’s radio network, television stations, online and social properties to create 360-marketing campaigns aimed at urban audiences) to target and profile prominent African-Americans. The campaign dovetails with the company’s broader “Why I work” efforts.

“Wells Fargo recognizes the potential of the African-American audience, and as they tell their story of helping customers, they reached out to us,” One Solution President Detavio Samuels tells Marketing Daily. “In the black community, you can tell a story about what people do, but there’s always and often a purpose behind why people do what they’re doing.”

The campaign revolves around longer (about two-minute) video profiles of notables such as Grammy Award-winning singer Melanie Fiona, University of Phoenix CFO Byron Jones and photographer and philanthropist Jamaica Gilmer. “My work is emotional and intentional,” Gilmer says in her video as she photographs an African-American girl. “When you see it, you understand what the person who is being photographed is experiencing in that moment.” She explained that her philanthropic venture, The Beautiful Project, began as a place to give young girls a voice where they previously may not have had one.

“These are stories that we know. Jamaica is some we know, and we’ve been dying to tell her story,” Samuels says. “A lot of people don’t know there’s a black CFO at the University of Phoenix, and that he’s doing what he’s doing to help the community.”

The stories will air in their entirety on One Solution’s TV One and online. They will also be cut up into 30-second segments to run as more traditional commercials and the audio will be repurposed on the company’s radio properties (in markets such as St. Louis, Charlotte, N.C., Washington, D.C., Houston and Atlanta). In addition, One Solution is producing “Why I work”-themed content for an online digital hub.

“We’re really big on capturing what content we can and then chopping it up into as many [pieces] as I can,” Samuels says.

Earlier this year, at the Association of National Advertisers Brand Masters Conference, Wells Fargo CMO Jamie Moldafsky said the brand was taking a “total market” approach to advertising to help grow its customer base. The approach involves bring all of the company’s agencies together to get insights on target audiences, as well as segments to identify “universal truths” that span cultures. As a result, the company’s strategy has become more representatives of broader cultures, including Asian, Hispanic and African-American.

“A brand understanding the motivator of what drives the consumer is the best way for them to connect,” Samuels says. “It strengthens the story that they have from a total market standpoint.”