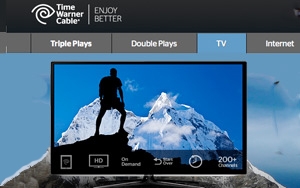 Analysts predicted that once Comcast -- the largest U.S. cable operator, with 22 million subscribers -- dropped its Time Warner Cable plans another suitor would make an purchase attempt.

Charter also said it will continue to complete another cable deal -- the acquisition of Bright House Networks for $10.4 billion. Time Warner Cable had been providing programming buying services for Bright House.

The deal will make Charter the second-largest U.S. cable operator with 23.9 million total subscribers -- cable, broadband and voice -- in 41 markets. Comcast has around 27 million total customers. Charter would be the third-largest U.S. pay TV provider to the proposed AT&T-DirecTV deal.

John Malone, chairman of Liberty Media, which has a significant 27% stake in Charter, has been instrumental in the deals -- as well as being vocal about aggressive industry consolidation overall.

Liberty Broadband Corp. holds the stake in Charter, as well as shares of Time Warner Cable; it will buy $5 billion of new Charter stock. There was previous speculation that Altice, a European-based communications company, would make a bid.

Charter had previously attempt to buy Time Warner Cable in 2013 -- only to be usurped by Comcast, the biggest U.S. cable provider, who abandoned because of regulatory pressures.

"With our larger reach, we will be able to accelerate the deployment of faster Internet speeds, state-of-the-art video experiences, and fully–featured voice products, at highly competitive prices,” stated Tom Rutledge, president/CEO of Charter. “In addition, we will drive greater competition through further deployment of new competitive facilities-based WiFi networks in public places and the expansion of the facilities footprint of optical networks to serve the large, small and medium sized business services marketplace."