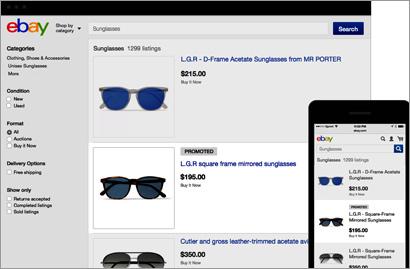 eBay has reinvented its advertising business through the launch Tuesday of a promoted listing service. Alex Linde, VP of advertising monetization, told Search Marketing Daily that the change focuses on mobile and a cost-per-sale (CPS) business model, which shifts the burden for paying for the ad away from sellers. Sellers only pay for the ad when it leads to a sale.

When bidding to promote a listing, the seller chooses a percentage of the item price to increase the visibility of the product, which will appear in search results and other places across the site, including mobile. The seller only gets billed for the promoted listing advertisement if the item sells. "Rather than use a cost-per-click model like bidding systems based on AdWords, we wanted to share the risk and reward," Linde said. "Many are not sophisticated marketers. Even some of the biggest brands in the world outsource their search campaigns to agencies and specialists."

Search remains the predominant way for people to find things on eBay, and much more browsing and discovery is going on these days to search through the 800 million items in the catalog. Linde estimates there will be one billion by the end of the year. The company supports 25 million sellers, selling 800 million items, and logs 300 million shopping hours monthly to support recommendations and forecast what people will purchase.

eBay will label the promoted listing ads and only show them when relevant; the relevancy is based on the consumer queries, trust in the marketplace, and a high probability that the item will convert. The move supports eBay's transition to a mobile commerce business, where the company estimates it will do about $30 billion in 2015.

It will initially launch in specific categories like electronics, but will roll out in a variety of areas during the next six months to year. Linde admits that eBay is in a unique position to see through the purchase funnel, from ad impression through the click and checkout and payment. This gives the company the data to make some interesting decisions.

On the product road map is an eBay app for the Apple Watch, although it's too early to say whether eBay will launch promoted listings in the app as wearable devices continue to grow in popularity. "While the majority of the activity on eBay has transitioned from auctions to new and fixed-priced items, it really makes auctions fun," Linde said. "If you're being outbid, you can raise your price with a tap."

Etsy launched promoted listings in August 2014, based on a cost-per-click bidding model. The service launched in September. Reviews among sellers are mixed. Earlier this month, jewelry maker Sarah Elizabeth from Design By Sarah Liz ran some stats for her promoted listings to discover that she spent a bit more than $40 and had $44 in revenue from the promoted listings.

While that's not much, she writes in a post: "I am not losing money either. And who knows if someone favored my item from a promotion ad, came back later, browsed my shop and purchased an item that way."

One thing is certain -- Sarah Elizabeth tends to get more favors and views with promoted ads, and notices that highly viewed and favored items tend to be higher up in the search results. "I think it can greatly benefit a shop whether it's from direct sales or from bumping your listings up in search results!" she writes.