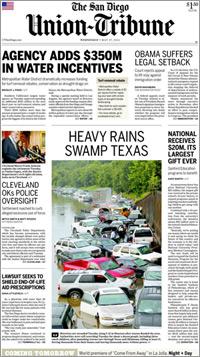 As expected, following its acquisition by Tribune Publishing Co. the San Diego Union-Tribuneis laying off a large number of employees with cuts focused on its production and distribution operations.

The move will help save costs; most of the production and distribution responsibilities will be consolidated with the Los Angeles Times, also owned by Tribune.

The U-T said it will lay off 178 out of a total 603 employees, including 100 employees in operations, including truck drivers and press-room workers, according to the U-T, which first reported the news. The layoffs also included 29 employees from the circulation department, 36 in ad sales and finance, and nine from the newsroom.

The cuts leave the newsroom with an editorial staff of 164, for a reduction of 5%.

Most of the newsroom cuts fell on the U-T-TV operations; the recent sale to Tribune did not including the TV studio or control room. Over the next month, the printing operations are being relocated to the LAT production plant in Los Angeles.

Tribune bought the UT from its previous owner, real estate developer Doug Manchester, for $85 million earlier this month. The deal leaves the newspapers as separate brands with separate newsrooms, but combines their management under a new operating entity, California News Group. LAT publisher and chief executive Austin Beutner will assume the same roles at U-T.

While U.S. newspaper publishers laid off thousands of employees following the economic downturn in 2008, announcements of staff reductions have become much less frequent over the last few years, suggesting newspapers were succeeding in stabilizing their finances.

However, as more reading takes place online and print circulation continues to decline, publishers will likely seek additional cost savings with further cuts in areas like production and distribution.