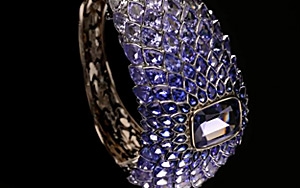 Tiffany & Co. says its first-quarter results came in better than expected, propelled by strong sales in both fashion jewelry and statement jewelry. Still, the results were heavily impacted by the strong U.S. dollar, which the company says weakened spending, especially among foreign tourists visiting its New York flagship.

Globally, sales fell 5% to $962 million. On a constant-exchange-rate basis, they fell 1%, versus an expected decline of 6.6%. And while net earnings fell 17% to $105 million, compared with $126 million a year ago, the drop was less than the company had anticipated.

“While the results are admittedly far from robust, they did exceed our expectations,” says Mark L. Aaron, Tiffany’s VP/investor relations in a conference call announcing the results. He says the company is also pleased with the execution of key store, product and marketing initiatives, including the introduction of its new CT60 watch collection.

“Tiffany delivered a clear beat off of higher sales and gross margin,” writes Deutsche Bank analyst Dave Weiner, “with outperformance driven by Europe, which seems to have benefited from an uptick in foreign tourist spending. In addition, the Americas posted a positive 1% comparison, even with continued pressure from a stronger dollar.”

Strong performers included the Tiffany T collection, launched last fall to expand the luxury retailer’s reach among “style-seeking self purchasers, as well as its Key collection.

Sales of silver jewelry priced under $500 continue to be soft, though, and Aaron says plans call for an improved product line as well as additional advertising, promoting them as “our little luxuries.”

And while it’s too soon to say how the new CT60 watch collection is selling, “initial reaction has been very positive.”

Other initiatives include store remodeling and relocation, as well as a greater focus on web content “as we look to better engage and strengthen relationships with existing and new customers.”