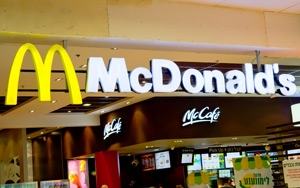 McDonald's, Coca-Cola and Budweiser are #1 within their categories of fast food, soft drinks and beer in the 2015 BrandZ Top 100 Most Valuable Global Brands ranking, compiled by Millward Brown and WPP.

McDonald's may be struggling to revive its mojo in the U.S., and it did lose 5% of its global brand value since last year (its value now stands at $81.2 billion), but it has held the top global fast-food brand position for all 10 years that this research has been conducted.

Chipotle Mexican Grill saw the biggest change in brand value — up 44%, to $10.7 billion — and it moved up one place in the fast-food category rankings, to #5.

Domino's Pizza is new to the list; its brand value has risen by 900% over the past 10 years.

Panera lost two places in the rankings, and Pizza Hut lost one. Burger King, as well as Chipotle, gained one place.

Nespresso lost two places in the rankings, while Fanta and Sprite each gained one place.

The other brands in the top 10 within the beer category are, in order:

Brahma gained two places in the rankings, and Skol, as well as Budweiser, gained one place.

The BrandZ Top 100 Brand brand value calculations are based on a proprietary method that employs earnings for specific brands and comprehensive survey-based research measuring the strength of the consumer relationship with that brand. It is the only ranking that measures consumer brand perception along with financial data to calculate brand value, according to Millward Brown and WPP.