Auto Sales Heating Up For Summer 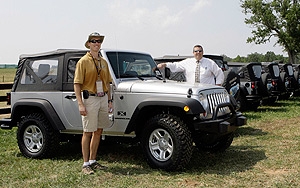 Spring is here and that means people are shopping for things. And things include cars. Prognosticators in the auto biz see a fairly blistering month, although down about 1% versus last year, which itself was a remarkable month.

The prediction by Kelley Blue Book is for1.59 million units rolling off lots (with retail sales about 82.2% of volume.) That is still exceptional, as it would mean an estimated 17.3 million seasonally adjusted annual rate (SAAR). Alec Gutierrez, senior analyst for Kelley Blue Book, said the decline from last year is the result of one less sales day. “May typically is a strong sales month, as consumers take advantage of warmer weather and advertised deals for the extended Memorial Day sales weekend.”

J.D. Power and its LMC Automotive unit works in the difference in selling days, coming up with the U.S. industry's highest since August last year, and on par with last May. The firm is predicting a 2% increase on a selling-day adjusted basis compared with the month last year, and the strongest daily selling rate in the month of May since 2004.

John Humphrey, SVP of the global automotive practice at J.D. Power said transaction prices will also break records this month, reaching $30,428 and besting the previous record set in May 2014. If so, Americans will have spent a record $39.6 billion on new vehicles, according to the Power Information Network (PIN) from J.D. Power. The firm says that would be the third-highest level of new-vehicle consumer spending in a month after August last year.

Kelley Blue Book predicts that Fiat Chrysler Automobiles (FCA) will keep its streak of monthly sales gains going to 62 straight months of growth, thanks to Jeep brand. Gutierrez says that those numbers would be even higher but for Jeep's software issues. “The Cherokee experienced similar troubles at its launch in late 2013 and is now Jeep's top seller.”

The firm says American Honda could report a slightly larger drop in volume, as two of their best-selling models — the Accord and Civic — are in segments that are losing popularity among consumers.

But regular fuel prices averaging $3.77 so far in May — up from $2.55 per gallon in January — their highest level since Sept. 2014, notes J.D. Power. The firm notes that higher gas prices are sparking life back into hybrid and electric vehicle (EV) sales in California, the strongest EV market. The firm says hybrid and EV sales are recovering nationwide. August last year, hybrid and EV sales made up 4.3% of nationwide sales and 10.5% of retail sales in California.

But small and mid-size crossovers and SUVs are still booming and are now 25% of new-care sales, per KBB.com — which says that will continue, even as gasoline prices are inching up. Small and mid-size car sales are flat and combined share is down 1.5% so far. The firm predicts that full-size pickup sales will be down 1.2%, but those numbers might be thrown because of the floods in Texas, the top market for trucks.