Summer TV Might Not Be 'Smarter,' But It Is Different 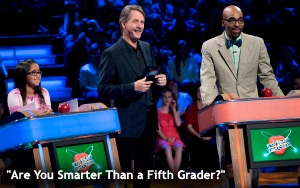 This week, I watched the summer quiz show on Fox called “Are You Smarter Than a Fifth Grader?” and was surprised to find out that the show doesn’t exactly pit grown-ups against children in a battle of wits -- at least not directly.

What happens is -- if I understand it correctly (because when it comes to understanding some TV quiz shows, I’m dumber than just about everybody) -- a grown-up contestant is challenged to answer a series of questions for ever-increasing amounts of prize money. He or she gets to choose the category and the grade level (be it fifth grade or any other grammar-school grade) from which questions are chosen and then posed by host Jeff Foxworthy.

To answer the questions, the adult contestant enlists the aid of a fifth grader. On each show, there are several such youngsters from which to choose. Then, the fifth grader and the adult both consider the same question, and the adult can defer to the child’s answer if he or she wants. I think.

What I had hoped to tune in and see were grown-ups being shown up by kids -- literally a competition between a child and a grown-up to see who’s smarter. I think that would be hilarious, but it’s also possible that the makers of “Are You Smarter Than a Fifth Grader?,” along with Fox, felt it would make for bad television if you had grown-ups trouncing children in a knowledge competition on national TV.

I don’t happen to agree. I think you’d have grown-ups winning sometimes and children besting their elders at other times. On the other hand, I have no experience in the creation of quiz shows or game shows. For example, I had an idea for a spinoff quiz show called “Are You Smarter Than a Chimp?” but other than a catchy title, I had no idea how you would actually build a show around it.

It’s not easy to do. Merv Griffin himself, who created “Wheel of Fortune” and “Jeopardy!,” once told me it took him 15 years to figure out how to turn ordinary, everyday crossword puzzles into a TV game show. He thought he’d worked it out, but the show failed. It was called “Merv Griffin’s Crosswords” and it lasted only one season. And Merv died before it premiered.

With the 2014-15 TV season “officially” ending last Wednesday (May 20), this is the time of year when new and returning summer series turn up on the networks. “Are You Smarter Than a Fifth Grader?” is one of the latter. So is “American Ninja Warrior,” which returned earlier this week to NBC for its seventh season (yes, seven seasons!).

New ones include “500 Questions,” a grandiose quiz show on ABC that started last week. This is a show that embodies the prevalent, modern style of newer, noisier quiz shows that take place on giant stages inside cavernous studios, with dark backgrounds, pounding music, and spotlights and strobes jumping all over the place. These elements are supposed to heighten the suspense. Of course, a cynic might say that if the suspense is authentic in the first place, then it doesn’t need such enhancements.

Last night, CBS introduced “The Briefcase,” a “giveaway” show in which families in financial trouble are presented with a briefcase full of cash ($101,000 to be precise) and then challenged to either keep it all or give at least some of it to some other family who is even less fortunate than they.

It’s an oddball concept -- one that seems to conform to the new summer scenario in the TV business in which the warmer months of the year become a laboratory of sorts for various experiments that, for whatever reason, wouldn’t necessarily fly during the regular season.

Or maybe “The Briefcase” would work at any time of year. I’m not sure. And if I was sure, then that would make me smarter than a TV executive, which wouldn’t be a bad concept for a summer series called “Are You Smarter Than a TV Executive?,” come to think of it.