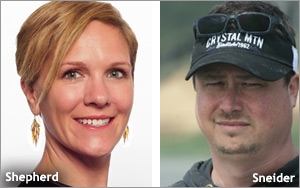 In his new position as CMO/EVP client partnerships, Sneider will be responsible for marketing content, as well as leading all verticals of new business development and overseeing client services within the company.

Sneider will also head Contend’s expansion in the Pacific Northwest and will oversee operations in their Seattle office.

He joins Contend having led advertising, digital and social media for various companies, including start-up Redfin, Microsoft, LL Bean and Fidelity Investments. He has held positions at Mullen and Digitas and worked with clients such as Time-Warner, AT&T and GM.

Shepherd will focus on the development of TV projects for traditional and non-traditional distribution. She joins the agency from Shine America where she oversaw global format development and acquisitions and will be based at the agency's Los Angeles headquarters.

“With the marketing and entertainment industries transforming before us, having world-class talent like Kate and Jon are real game changers for Contend," says Amato. "Their strategic, creative, production and thought leadership within the television and marketing industries are unrivaled. Now having offices in Seattle, Chicago and Los Angeles, Contend is excited to continue to grow into the expanding opportunities that lay ahead."