Once More Into The Brief, Don Draper 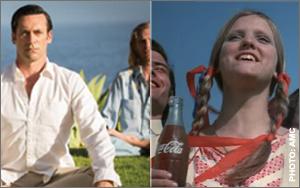 At the risk of beating a dead finale, I do have a few recent revelations to chew over — straight from the horse’s mouth, so to speak.

Last week, “Mad Men” creator Matthew Weiner gave a solo, post-series interview to novelist A.M. Homes at the New York Public Library. I was there, stalking him as usual, when he gave the definitive answer: "I have never been clear, and I have always been able to live with ambiguities," he said. "In the abstract, I did think, why not end this show with the greatest commercial ever made?”

So I was wrong: For Weiner, writing this ending wasn’t a cynical act at all. It was quite the opposite, in fact. A former scribe on “The Sopranos,” Weiner decided to do a reverse David Chase: to cut to commercial, which he saw as a way of allowing Don to live, while "The Sopranos" cut to black, implying that, bam, this is Tony’s brain on ice.

The only hitch for “Mad Men” purists, of course, is the niggling detail that “Hilltop” was a real commercial, created at McCann by Bill Backer, a real ad guy, who is very much alive and kicking. Weiner had never attributed real work, done by a living person, to Don before, and the showrunner didn’t address that aspect when defending his earnest choice. Instead, he said he’d thought the ad was the definition of pure and beautiful, and that “there isn’t enough empathy in the world.”

Talking about how disturbing he found “the cynicism,” he said: “The people who find that ad corny, they're probably experiencing a lot of life that way, and they're missing out on something. Five years before that, black people and white people couldn't even be in an ad together!”

He added: “Unless your heart is made of ice, it’s hard not to react to faces that pure.”

Okay, so we will call a bit of disingenuousness on Weiner’s part. It’s interesting that he mentions ice, which characters often shouted for in Sterling Cooper offices as a palliative to plunk into the gin, to facilitate more manipulation, more hound-dogging and more boozing. If that’s not cynical, what is?

Never mind. The point is, instead of falling from a great height — the implied ending for Don as seen in the regular animated opening — he ascended to the mountaintop. Don was literally turned on his head. That was clever, as was the blocking for the yoga class high above the Pacific in heavenly Big Sur, which matched the blocking of the “Teach the World to Sing” Hilltop group in Italy. Don is wearing white, the color of purity, and beige pants, to blend into the earth. And yes, that meme of the girl at the Esalen desk in the peasant top and ribbons in her hair matched that of the pure-faced, peasant-shirted lip-syncher on the hilltop.

Certainly, there were other clues. Jim Hobart’s speech welcoming the Sterling Cooper partner group to “advertising heaven” seemed merely evil, and just another knock at McCann. But it makes more sense now. Hobart tells the partners they will work on the best, most coveted accounts, and ticks off all the brands. Then he gets to the final one (the finale, if you will) and can’t even use his normal voice, because that would sully the name. Instead, he pronounces the four syllables with a reverential whisper, like it’s a mantra, or the secret meaning of life: “Coca-Cola.”

And indeed, for Don, a fictional character in a fictional show, creating that ad for Coke is the real thing. As Weiner said at the library evening, “Don likes strangers, he likes seducing strangers. That’s what advertising is.”

Don is finally ditching Dick and all his destructive demons and accepting himself as Draper, weird fake identity and all, to do what he’s good at. I’m hopeful, to extend this fictional universe, that once Don returns to New York and a semi-stable life in advertising (after winning every award there is for “Hilltop”), he can be there for his kids.

In an earlier episode this season, when Don was tapped to write that speech about the future, he brings Peggy into his office to pick her brain. She complains that she hasn’t ever gotten a review from Ted. And so Don tells her he’ll do it. When she confides her dream about her work — to make something lasting — he responds: “And you think that you can do that in advertising?”

“This is supposed to be about my job, not the meaning of life,” Peggy spits back.

“So you think those things are unrelated?” Don asks.

So the world did not end in fire, or ice, to paraphrase Robert Frost, but with advertising. D. B. Cooper-believers held out until the very end, and considering that Weiner used a real-life commercial, that wasn’t so farfetched a theory. Others insist that Peggy did the Coke spot. Weiner made clear that it was Don’s concept and he went back and created the ad, but it’s certainly credible to think that Peggy helped.

All in all, it was a pretty great way to bring the show full circle. It wasn’t a terribly artful ending, but it was substantial and satisfying. Or, as Weiner said, it was “a way to have your cake and eat it, too.”

Meanwhile, this whole “Mad Man” edition Mad Blog experience has been exhilarating. Thank you so much, readers — along with the commenters who have added an amazing amount of humor, depth, insight, historical accuracy, and just plain fun into the conversation.

Speaking of which, please humor me through one more "Mad Men" column next week: The world needs more empathy, as Weiner put it. And I think it’s also lacking one last analysis.

mad men, tv
32 comments about "Once More Into The Brief, Don Draper".
Check to receive email when comments are posted.
Read more comments >
Next story loading