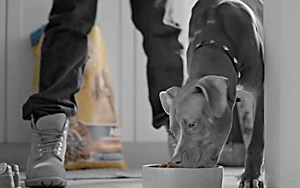 Mars Petcare’s Pedigree brand is expanding the global “Feed the Good” campaign to the U.S. with an online commercial.

The campaign, which is based on the belief that dogs bring out the good in people and Pedigree brings out the good in dogs, launched earlier this year in Brazil and Australia.

This is the first creative under the “Feed the Good” banner to launch in the U.S., says Chris Mondzelewski, VP of marketing for Mars Petcare.

The 45-second spot, "The Walk," which debuted Thursday, was created by BBDO, New York, and directed by Lance Accord, known for his work on “Lost in Translation, “Being John Malkovich” and “Adaptation.”

“We currently plan to feature ‘The Walk’ online and have a paid media plan in place to help ensure consumers can be exposed to the power of the work,” Mondzelewski tells Marketing Daily.

The spot opens on an older man leaving his home to walk his dog. As the man and his dog navigate their neighborhood, the man exhibits a gruff demeanor. As he continues his walk, his eyes lock on a teenager also walking his own dog. While the two may normally pass each other without a second glance, their dogs stop to greet each other. The dogs see no color, no age, no differences, only the good which leads to an unexpected interaction between the man and the boy.

“Pedigree is the world’s largest dog food brand, so obviously the brand is well-established in multiple markets around the globe,” Mondzelewski says. “Our plan is to leverage the excitement from some of the initial roll-out markets to sustain interest in the campaign as we introduce it to dozens of new markets including Russia, Mexico and many others.”

The campaign is open ended, he says.

“’Feed the Good’ is an entirely new campaign, but it’s based on a universal insight that builds on the storytelling we’ve been doing since we started our adoption campaign years ago.  So there’s no reason to think it will end,” Mondzelewski says.

Creative builds on research from Mars, Inc.'s Waltham Centre for Pet Nutrition, which focuses on the nutrition and wellbeing of dogs -- and other animals -- and their benefits to humans.

Waltham studies have indicated that dogs and other animals can help children cope with a variety of issues -- self-esteem, emotional disorders and may even improve immune function if raised with a pet from infancy. Another survey showed that 70% of families reported an increase in family happiness and fun after they acquired a pet.

A new study from Waltham published this month shows that pets are catalysts for social interaction between humans -- from casual conversations to lasting friendships. The study found that pet owners are significantly more likely to meet new people in their neighborhoods than non-pet owners -- dog owners are five times more likely to get to know people in their neighborhoods compared with even other pet owners.

“We think the work is synonymous with the type of good dogs bring to the world every day,” Mondzelewski says.