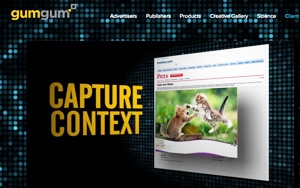 In-image advertising firm GumGum has raised $26 million in a new round of funding that values the company at around $200 million, the company announced Thursday.

A number of GumGum’s previous investors also participated in the new round of funding along with Morgan Stanley, including NEA, Upfront Ventures and First Round Capital. In 2011, a previous round of funding led by NEA raised $7 million, on top of an initial round of $3.8 million.

GumGum founder Ophir Tanz tells The Wall Street Journal the company may go public by the end of 2017, but emphasized there is no firm timeline for an IPO.

Launched in 2007, GumGum claims that its contextually placed in-image ads reach over 400 million unique visitors per month across various channels, up from 300 million around the middle of 2014.

It has worked with advertising clients including Walt Disney, L’Oreal, Toyota and Samsung. The company is on track to take in around $75 million in revenues in 2015, judging from its business so far this year.

In addition to contextual in-image ads, GumGum recently began offering other types of in-screen ads and is experimenting with video. Also, it has moved to integrate programmatic trading for in-image ads, while maintaining their contextual relevance. In September of 2014, it partnered with programmatic ad trading platform Xaxis for automated sales.

Earlier this month, it announced that Ben Plomion was joining the company as senior vice president of marketing to lead outreach to advertisers. Plomion previously worked at programmatic ad platform Chango.