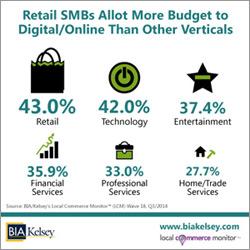 SMBs retailers only spend about $700 annually on paid search, which suggests that search engines are failing to attract small local businesses with a storefront that have up to 99 employees. Their average ad budget for the 12 months prior to the survey was $17,700, which isn't as high as some other verticals, according to research released Monday.

The BIA/Kelsey study found that SMB retailers plan to spend 43% of their total ad budget on digital media during the 12 months following the survey, which took place in the third quarter of 2014. This puts retail SMBs at the same high level of digital allocation as franchise SMBs, which reported plans to spend 42.9% of total ad budget on digital. The total budget for retailers, however, sits at about half the amount spent by SMBs in the entertainment category, which includes restaurants.

Retail is relatively low because these small and medium-size businesses depend on social media, said Steve Marshall, director of research at BIA/Kelesy

The data suggests that SMB retailers are more cost-sensitive because of the low margins in retail. They rely heavily on loyalty programs that don't require them to spend budgets on media. These programs do require CRM software, yet only 21% use it. Some 81% have kept a customer list for about a year, which is a precursor to using CRM software. Another 9% have kept lists for more than a year, and the remaining do not keep any sort of customer list.

Most SMBs in the retail space spend their money on social media. Some 74% of SMB retailers have a Facebook page, with 29.7% are paying for Facebook ads, according to Marshall.

The SMBs in the retail vertical for mobile advertising isn't that high -- at about 11.4% -- but those using mobile report high returns on investments, per Marshall. "This means they should increase their investment in the coming year," he said.

About 11.4% of SMBs in the retail space have mobile Web sites. They also like to use mobile deals like coupons and other promotions, 10.5%; followed by text messages at 6.2%. Advertising in mobile apps, 5.7%; and mobile search, 4% round out the top five categories when it come to the most frequently used media. Collectively, for all mobile categories, SMB retailers spend 2.1% of their budget on mobile.