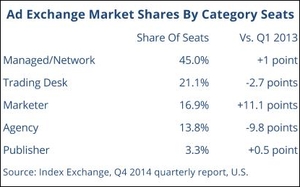 The programmatic media-buying marketplace is growing rapidly, but it is rising faster among some stakeholders than others, especially among marketers themselves, according to the latest edition of a quarterly tracking report on the U.S. programmatic ad-trading marketplace. The report, the fourth-quarter edition of the Index Exchange’s U.S. marketplace data, shows that the percentage of “seats” owned by in-house marketing teams has grown to 16.9% of the total marketplace.

That’s up from only a 5.9% share of seats owned by marketers’ in-house trading teams when the exchange began reporting such data in the first quarter of 2013.

The smallest sector of the marketplace is among publishers, which account for a 3.3% share of seat-holders, mainly as part of their own in-house audience extension programs.

While their share of seats on exchanges doesn’t necessarily correlate directly to shares of programmatic trading, Casale says the data indicates growth among marketers is coming both from new clients trying out in-house trading and existing client seats doing more of it.

“Marketers are doing more of it and it’s not stopping,” he explains, adding: “That’s why it’s taking share from other categories.”

The Index Exchange market share data follows a number of surveys indicating that marketers are starting to -- or plan to -- take some or all of their programmatic media-buying in-house. A study released last month by Advertiser Perceptions Inc. found that the majority of marketers surveyed (59%) are “planning to move their programmatic buying in-house. The same survey found that 61% of agency executives don’t believe that will happen.

The Index Exchange data is empirical proof that it already is happening, says Casale adding that it’s not necessarily an all-or-nothing-at-all proposition -- and that in a lot of cases, marketers are taking seats from multiple DSPs, testing them, and then picking the one that delivers the best results for them over time.

While patterns differ among marketers, Casale says two things are consistent. One is that there is a clear trend toward marketers at least trying in-house trading and often experimenting with different DSPs and mixes of in-house vs. managed services. The other is that they don’t stop doing it.

“What we rarely see is a marketer who starts trading in-house and then stops,” Casale observed.

Even when clients are utilizing managed services for programmatic media-buying, it may effectively be managed in-house and not through their traditional agencies or trading desks. Publicly traded Rocket Fuel, one of the biggest managed programmatic media-buying services in the marketplace, reported recently that it added 80 new direct advertisers to its roster in the past year, and that 24% of its revenues currently come directly from marketers vs. only 76% from agencies representing advertisers.
ad buys, ad exchange, agency, media buying, media measurement, programmatic, trading desk
1 comment about "Musical Chairs: Client Seats Surpass Agencies, Take Trading In-House".
Check to receive email when comments are posted.
Next story loading