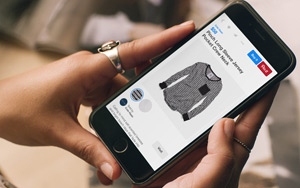 Sure to turn tons of browsers into buyers, Pinterest is preparing to launch buyable Pins online and on mobile devices. In a few weeks, when users spot a Pin with a blue price, that means they can buy the featured product on Pinterest.

Promising more than 2 million buyable Pins in the very near future, Pinterest is working with a number of larger retailers, including Macy’s, Neiman Marcus, and Nordstrom, along with thousands of Shopify stores, and retailers powered by Demandware like Cole Haan and Michaels.

With the forthcoming service, Pinterest doesn't plan on taking a cut of retailers’ transactions. “Buyable Pins are free to merchants and Pinners,” a company spokesman said on Wednesday.

Chao Wang, engineering manager at Pinterest, said people were begging for the ability to buy the products they came across on other users’ boards. “Lots of you have said that you’d like to buy the things you discover on Pinterest,” Wang writes in a new blog post.

The new service will come with a price and color filter for shoppers to hone in on just the right product. When users are ready to check out, they’ll only need to tap the “Buy it” button, and pay with Apple Pay or a credit card.

Along with recent changes to its ad products, analysts say Pinterest is doing a good job exploiting its position at the intersection of social, search and ecommerce.

“Pinterest has a unique positioning in that it's both social and search,’” Debra Aho Williamson, principal analyst at eMarketer, recently told Social Media & Marketing Daily. “Now the company has offerings for all stages of the marketing funnel for businesses of all sizes.”

According to recent research from Millward Brown, a full 93% of active Pinners said they use Pinterest to plan for purchases, and 87% said they’ve purchased something because of Pinterest. Pinterest doesn't release user figures, but eMarketer estimates that the site's U.S. monthly active user base will reach 47.1 million in the US in 2015 -- up 11.4% from last year.

Among other challenges, the vast majority of Pinterest's audience remains female -- totaling 39.2 million or 83.3% of all U.S. users this year, eMarketer estimates. Even though its male user base is increasing at a more rapid rate than its female audience, males will barely crack 20% share of Pinterest's U.S. audience by 2019.

Rather than store users’ credit-card information itself, Pinterest is working with independent payment processors, while, when users pay with Apple Pay, it uses a device specific account number instead of an actual credit-card number.

On mobile, buyable Pins should be available for IOS device users in a matter of weeks, while Android users will have to wait longer.