USA Says 'Mr. Robot' Premieres Later This Month, But It's Already On 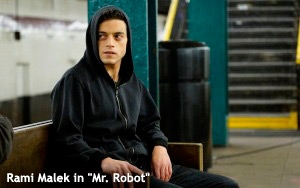 The premiere date is supposed to be June 24, but the premiere episode of “Mr. Robot” has been available for anybody to watch any time they please since May 28.

So which is the real premiere date? Such are the questions that arise in the present TV era in which TV shows are still presented the old-fashioned way -- i.e., scheduled for a specific date and time -- but also launched online, sometimes on a much earlier date, as in the case of “Mr. Robot.”

This show is a centerpiece of USA Network’s summer schedule -- a cyber-thriller about a young man who coexists uneasily with the real world in which he works (as a technician for a cybersecurity firm in New York City) and the world inside his head, where his paranoia and alienation has him cyber-spying on everyone he meets. He even hacks into the private e-mail and social media accounts of his therapist. As a result, he knows far more about her than she’ll ever pry out of him.

USA is evidently presenting the premiere episode of “Mr. Robot” online to drum up interest in the series’ run on TV. But you might also wonder if making the premiere available in advance risks diluting or diminishing the potential audience for “Mr. Robot’s” opening night on USA, if many have already streamed the show and will find it unnecessary to tune in on the 24th.

It’s also true, however, that the premiere episode is the only episode of “Mr. Robot” available online at present, which might mean USA hopes that those who sampled the premiere online will then look for subsequent installments on the network on Wednesday nights.

These issues are not easy to sort out, since the duel between “linear” and “non-linear” TV viewing is ongoing, with all TV networks trying to figure out the best balance between the two.

For a TV columnist, the challenge is how to decide when the time is best to review a new show. Traditionally, you wrote and published a review on or several days before a premiere date. For “Mr. Robot,” then the probable review dates would be later this month in the days leading up to the 24th.

But with the premiere episode already online, you might say “Mr. Robot” has already premiered, even if USA doesn’t consider the online premiere as the show’s “official” debut.

Whatever the premiere date -- or whenever you choose to watch “Mr. Robot” -- this is a show well worth sampling. It is the best of the new summer dramas I’ve seen yet.

In at least two respects, “Mr. Robot” came as a big surprise because of two elements for which I usually have little patience: No. 1, it’s a computer drama, and No. 2, it is narrated by its main character.

Dramas based around computer hacking and genius computer techs have been around for at least 20 years in movies and TV shows, and they rarely succeed in generating the suspense that they aspire too. Think of all the countless scenes you have seen of nimble fingers flying across keyboards and coming up instantly with the detailed blueprints of skyscrapers or maps of dense city neighborhoods. These scenes are rarely credible.

Somehow, the computer whiz in “Mr. Robot” -- a man named Elliott -- is one of the first of his kind to come across as believable on a TV show. This is due to the quality of this show’s production, but also to the performance of the actor who plays him, Rami Malek, who’s like a contemporary, but flawed Mr. Spock -- emotionless, psychologically confused and, it goes without saying, highly intelligent.

Elliott is also the narrator of the show. While watching the premiere episode, I was struck by how effective this narration was --  unlike so many other movies and TV shows in which narration is used primarily as a cheap and un-creative shortcut for explaining a TV show or movie’s premise without having to actually come up with visual ways to establish the situation.

Elliott’s narration was a rare thing -- literate, compelling and interesting. When the premiere episode of “Mr. Robot” was over, its complicated storyline was really just beginning. I’m eager to see more -- whether online or Wednesday nights at 10 o’clock.