Yahoo Will Stream NFL Game This October, A Streaming First 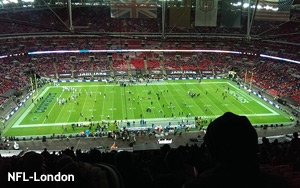 It used to be that “on any given Sunday” anything could happen in the NFL -- but when it did, it would be happening on television.

Not anymore. The NFL announced that its first video-streamed-only game will be shown via Yahoo on Sunday, October 25, when the Buffalo Bills play the Jacksonville Jaguars, from a stadium in London. Previously, the NFL streamed the Super Bowl while the game was being shown primarily on network TV. (Fans in Buffalo and Jacksonville will still see the game on a network-affiliated station in those markets.)

Buffalo and Jacksonville are among the NFL’s smallest markets and not among its best teams. London has, at best, a nascent NFL fan base, and because the game is being played there, Yahoo’s stream will begin as 9:30 a.m. Eastern, and 6:30 a.m. on the West Coast.

The NFL announced earlier that it would debut this online game, but it didn’t say which online provider would do it. Re/Code today is saying Yahoo paid the NFL at least $20 million for the rights, and Re/Code says there was at least one competing offer.

“We're thrilled that the NFL has chosen Yahoo for this historic opportunity,” said Yahoo CEO Marissa Mayer in a statement. “It marks a significant change in the way users can access this amazing content. The NFL and Yahoo have both long engaged football fans around the world. Our partnership provides the ultimate football experience — with digital availability, designed for the modern fan.”

In the past, it has been rumored that Netflix would bid on a package of NFL Thursday night games that becomes available after this season. If the Yahoo game is successful, or seemingly so, the NFL might have found a new market, and a new bunch of bidding competitors to deal with.”

The game also provides for some tantalizing opportunities for Yahoo and the online video industry generally to display the kind of detailed advertising analytics it can provide that is generally not available to television advertisers. But advertising data from mobile phones is not very developed yet.
football, online, sports, streaming, tv, yahoo
1 comment about "Yahoo Will Stream NFL Game This October, A Streaming First".
Check to receive email when comments are posted.
Next story loading