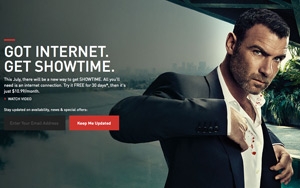 CBS will put its pay TV service Showtime into the stand-alone TV streaming category, joining the likes of Time Warner’s HBO Now, which started up some months ago.

For the new Showtime digital service, the monthly price tag will be $10.99/month -- $4 less than HBO Now’s $14.99. Showtime service will start up to coincide with the new seasons of “Ray Donovan” and “Masters of Sex” on July 12.

The launch will be on Apple digital products on the iOS platform -- iPhone, iPad, iPad Touch, and Apple TV -- with additional platform devices coming later.

The new Showtime digital service will offer the live coastal feeds and unlimited on-demand access to original series as well as movies and sports programming. Showtime will offer a 30-day free trial to new customers who sign up through Apple in July.