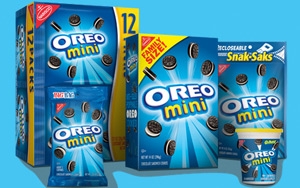 The company, one of two companies created when Kraft Foods split in two several years ago, spends and estimated $2 billion annually on ads. The Wall Street Journal first broke the news that the review was imminent about a month ago. The company confirmed the review late Wednesday.

Mondelez brands include Oreo, Cadbury, Chips Ahoy! and Gevalia, among many others.

The global review will pit two incumbents in a shootout for the entire media planning and buying assignment — Dentsu Aegis Network and Publicis Groupe’s Starcom MediaVest Group. SMG handles U.S. duties on the account and Dentsu Aegis has the assignment for continental Europe.

With its decision to have its two core agencies compete for the assignment, two regional shops, PHD (UK and Ireland) and Madison (India) are not being invited to participate in the review. The issue isn’t performance-related, the client indicated, but rather about an opportunity to gain efficiencies that can be re-invested to drive further growth.

Both agencies are also busy defending other pieces of business, including Procter & Gamble, which tossed its North American media assignment into review a few weeks ago.

SMG is also busy defending its U.S. Coca-Cola business. The company called a pitch in the U.S. — where it spends about $400 million annually on ads — in April. Denstu has opted out of pitching the Coke business.

Not counting Mondelez, there is now some $25 billion worth of annual ad spending up for grabs in media agency pitches, according to Tom Denford, North America CEO, ID Comms. His advice for those marketers who might also be contemplating a media agency review: hold off until next year.

As he states in a guest column for MediaPost’s Agency Daily: “That’s because agencies have limited resources to put together a competitive offer for your brand and that resource is likely to be stretched. You could find that the value you seek – be it talent, price or access to innovation and technology, is not on offer because there are potentially better partners in town.”

Mondelez expects to complete the review by early fall with appointments effective January 1, 2016.