Who Is He Now? Colbert Struggles To Find Himself In CBS Debut 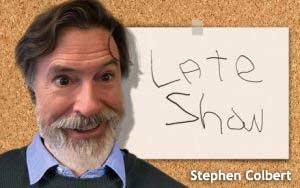 A beard-shaving bit? Is this all Stephen Colbert could come up with for his CBS debut?

The first salvo in this week's Colbert launch took the form of a press release and a video -- the latter showcasing Colbert poking fun at his current hiatus from television since leaving Comedy Central last December during which time he grew a beard, which he was then shown shaving off. Yawn.

The press release from CBS announced the video, plus the launch of a new Colbert Web site and four social media accounts: Twitter and Facebook as well as YouTube and Google+.

The network also made a slight change in the “Late Show” title that was little noticed -- the word “The” has been added to the official title of the show, as in “The Late Show with Stephen Colbert.” Previously, in the Letterman era, the official show name was just “Late Show (with David Letterman).”

CBS posted no new “official” photos of Colbert for use by the media, but a photo of the bearded Colbert is seen in the header of all the aforementioned social-media destinations. There he is (in the photo, above) with a befuddled (if not deranged) expression on his face, standing before a cork bulletin board festooned with three Post-It notes, one of which reads: “Figure out who self is."

The impression given by Colbert's inaugural CBS video indicates that this figuring-out process remains a work in progress. The comedic Post-It note reveals, however, that Colbert and his handlers are well aware of the challenges they face.

It's the one question that has hovered over Colbert ever since he was announced as Letterman's replacement late last year: Can Colbert make the transition from the “role” he acted on “The Colbert Report” -- that of a bombastic, bloviating fictional character who happened to be named “Stephen Colbert” -- to now undertake a new role as the “real” Colbert (whoever he might be) who will host a much more prominent and, by all expectations, conventional late-night show on CBS?

In the video CBS posted on Wednesday, Colbert's persona at this stage appears to be the same thing he was before -- basically, a pompous but mild-mannered doofus who manages to be likable or at the very least, inoffensive.

It was the beard-shaving bit that came off as less successful, however, because it just seemed so unimaginative. How many of these have we seen in late-night TV after the host takes a long vacation or has a lengthy hiatus between shows? Letterman himself had his vacation beard shaved on his show, probably on more than one occasion. Conan O’Brien also did the beard bit, and I’m sure others have as well. I think we can safely say that the sell-by date on beard bits for late-night hosts has passed.

On Thursday, CBS let another Colbert announcement out of the bag with a press release naming a bandleader for the new show -- a 29-year-old New Orleans musician named Jon Batiste. As is all-too typical for “news” announcements these days, CBS' release on this crucial music portion of its new Colbert late-night show contained almost no details such as the makeup of the band -- the number of players and their instruments, for example, and heaven forbid, even their names. The new ensemble’s name -- if it has one -- would have been a helpful and obvious detail to include too.

But there was another Colbert video to go along with this bandleader announcement. In this one, the “doofus” character was seen once again, this time in New Orleans (or so he said) to introduce his new bandleader. The shtick in this one had the Colbert character consuming an entire platter of beignets, after which the front of his dark suit and much of his face were covered in powdered sugar.

Colbert has three months left in which to figure out what he’s going to do with his new show. That ought to be enough time, if not more than enough, to get it more or less right by opening night. Our advice: Shave every day and avoid the beard bits.

broadcast networks, tv
4 comments about "Who Is He Now? Colbert Struggles To Find Himself In CBS Debut".
Check to receive email when comments are posted.
Read more comments >
Next story loading