What Seinfeld Really Said About Comedic Free Speech On Campus 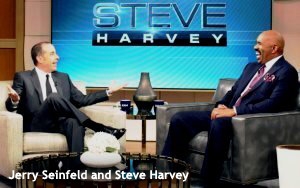 Jerry Seinfeld is outspoken on the subject of comedy, and he recently spoke out about one category of venues that comedians have become wary about -- college campuses.

The reason: Political correctness is so dominant and rampant on college campuses today that comedians are no longer comfortable performing for collegiate audiences, Seinfeld said.

In an interview on ESPN Radio, Seinfeld said comedians he knows -- acquaintances and friends of his -- try to avoid performing on college campuses because the audiences get offended so easily whenever the subject matter of a comedian’s stand-up act veers into territory that is not deemed politically correct. And these days, that’s a lot of territory.

He did not cite specific examples, but anyone who follows current trends on campus is no doubt aware of the ways in which free speech has become less free on college campuses. These include the many stories of speaking invitations being withdrawn from right-leaning personalities after the invitations sparked protests, plus the “trigger-warning” trend, whereby students are now to be forewarned by their professors whenever the prof intends for a lecture to cover subject matter that might “trigger” a negative psychological response -- such as tears or unhappiness, for example -- in susceptible students.

Seinfeld didn’t mention these things, but this is what you can infer from what he said June 4 on “The Herd with Colin Cowherd” on ESPN Radio.

“Does the climate worry you now?” he asked Seinfeld. “I’ve talked to Chris Rock and Larry the Cable Guy. They don’t want to do college campuses anymore …”

“I hear that all the time,” Seinfeld answered. “I don’t play colleges, but I hear a lot of people tell me, ‘Don’t go near colleges. They’re so PC.’ I’ll give you an example. My daughter’s 14, my wife says to her, ‘Well, you know, in the next couple of years, I think maybe you’re going to be wanting to be hanging around the city more on the weekends so you can see boys.’ You know what my daughter says? She says, ‘That’s sexist.’ They just wanna use these words -- ‘That’s racist.’ ‘That’s sexist.’ ‘That’s prejudiced.’ They don’t even know what they’re talking about.”

When Seinfeld said he doesn’t “play colleges,” I took it to mean he just doesn’t play them, probably because his pay scale for performing is on a whole different level than college-event organizers are likely accustomed to paying. So he plays top venues such as casinos and theaters. I didn’t take it as a conscious boycott on his part.

And when compared to comedians such as Chris Rock or Louis CK, for example, Seinfeld’s material is famously mild, although even some of his current material probably wouldn’t play on today’s trigger-happy campuses.

Last month, Seinfeld appeared on Steve Harvey's afternoon talk show and the two had a lively conversation about phrases used by African-Americans that white people don’t use and have often never even heard. Among the words and phrases: The word “hawk” to indicate a brisk wind, as in “a big hawk is comin’ in” -- a usage Harvey indicated was common in the black community in windy Chicago, where his talk show is based; and “let the window up,” which means “open the window.”

On a college campus, this routine would probably be met with gasps -- if not tears -- particularly if Seinfeld, a white comedian, were the one delivering it. On the “Harvey” show, however, Harvey was an enthusiastic participant in the discussion. And, it should be noted, the world did not end.