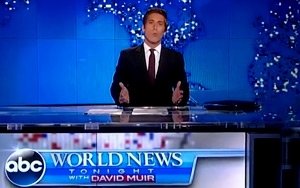 While NBC readies its decision on the future of news anchor Brian Williams, “NBC Nightly News” show continues to trend down in key viewers TV advertisers want most. But it maintains higher overall viewership.

In the most recent reporting week in June, ABC’s “World News Tonight with David Muir” earned 1.97 million average key 25-54 viewers for the week ending June 1, up 2% versus the same week a year ago.

For the season so far, “World News Tonight” is now on top of all early news broadcast TV series among these viewers -- the first time that has occurred in two decades.

ABC earned 7.945 million overall viewers for the first week in June, 6% higher than its 7.47 million of a year ago;

For the entire month of May, “NBC Nightly News” averaged higher overall viewership for all networks evening news shows: 7.723 million. ABC’s “World News Tonight” was at 7.686 million; and CBS, 6.643 million.

This year’s first week June results were based on four-day averages for NBC and ABC, due to NHL programming for NBC and NBA programs for ABC.