'Seinfeld' Repeats On Hulu: Much Ado About 'Nothing' 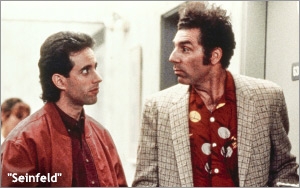 “Seinfeld” is so ubiquitous that it’s practically like the TV version of wallpaper.

And it’s been this way for what? Twenty years? Despite this classic TV show's omnipresence, the folks at Hulu are promoting the upcoming streaming debut of the show as if it’s the second coming.

You can’t blame them for their enthusiasm. They’re supposed to project excitement for this kind of acquisition, for which they paid an estimated $150-180 million, according to various reports. The episodes start streaming on Hulu next Wednesday, June 24.

They bought the rights to stream every single episode of this show (180 of them), which is, let’s face it, almost everyone’s favorite TV show -- the famed “show about nothing.” In theory, the availability of every “Seinfeld” episode for viewing anytime, without regard to such a thing as a broadcast schedule, should have “Seinfeld” fans flocking to Hulu.

But will they? Herein lies a conundrum. Just how valuable is a property such as “Seinfeld” after all these years of multiple plays -- and when we’re talking “multiple” here, we’re talking about hundreds, if not thousands of plays?

So you have to wonder: Who’s the target audience for these streaming episodes? Is it the millions upon millions of “Seinfeld” fans who have already shown their devotion by watching every episode hundreds of times in rerun syndication for years and have practically memorized every one of them? This group would seem to have already reached their “Seinfeld” saturation point. Or at the very least, they’re fine with watching “Seinfeld” on their local TV stations or TBS.

Or is the potential audience for “Seinfeld” on Hulu to be made up of younger viewers who perhaps do not have long, personal histories with this show (which aired from 1989 to 1998) and might now form their own “Seinfeld” habits?

And another question: What about those “Seinfeld” repeats that are still on “regular” TV -- TBS and local stations all across the country? What does Hulu’s streaming do to the value of these repeats in syndication? Will it dilute the value for all those stations, and TBS, that paid so much to air them? Or might it have no consequences whatsoever?

When Hulu announced its “Seinfeld” deal at its upfront presentation in New York in April, only two benefits (does the ad biz still call them “unique selling propositions”?) of the “Seinfeld” streaming episodes were actually mentioned. One was the “convenience” factor, that they will be available at any time, and that Hulu users could cherry-pick any single episode they wish to watch without regard to the order in which they were first broadcast.

And as Jerry Seinfeld himself mentioned at the upfront, these Hulu “Seinfeld” episodes would be “restored” to their original lengths. The episodes have had various lines of dialogue and small scenes snipped out of them over the years in order to stuff them with more commercials.

If you're some kind of television purist, this is an unfortunate practice, but it is quite common in rerun syndication, and has been common for many years. So the question here is: Does the average person really care about these edits, or even notice them?

Also bear in mind: Restored or not, the “Seinfeld” episodes on Hulu will have commercials. And you have to subscribe to Hulu to watch the episodes. With “Seinfeld” already so readily available on TV, you have to question whether many people will want to buy a subscription just to see an off-network sitcom with commercials in it that they can already watch, with commercials, elsewhere.

For those who have no history with “Seinfeld,” then a showcase on Hulu presents a terrific opportunity for sampling the show and perhaps finding out what all the fuss is about. In a way, the “Seinfeld” stream is today’s version of the old DVD packages, which not too long ago were the only means in which you could watch a classic TV show in your own way and in your own time.

I suspect the Hulu “Seinfeld” episodes will complement, rather than overtake the reruns that are still so ubiquitous on regular TV.

hulu, streaming, tv
1 comment about "'Seinfeld' Repeats On Hulu: Much Ado About 'Nothing'".
Check to receive email when comments are posted.
Next story loading