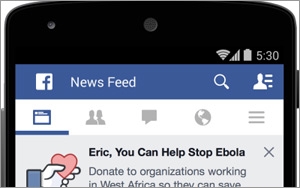 Continuing to fiddle with its News Feed, Facebook will now factor the time users spend viewing stories into its master algorithm.

For example, if someone hovers over a piece about political affairs, they are now more likely to see similarly scandalous stories in their News Feed.

“We learned that in many cases, just because someone didn’t like, comment or share a story in their News Feed doesn’t mean it wasn’t meaningful to them,” they write in a new blog post.

“There are times when, for example, people want to see information about a serious current event, but don’t necessarily want to like or comment on it,” according to Yu and Tas.

For Facebook, however, the change is not as simple as measuring the number of seconds that users spend on each story.

It's not an uncommon practice for Facebook to tweak the algorithm that determines what content users see in their News Feeds. While the expressed intent of the changes are always to improve user experience, they often result in lowering the organic reach rate of publishers and marketers.

Facebook recently implemented another tweak that it said would prioritize personal status updates over other posts, including those from publishers.

With the changes “Facebook is trying to solve a real problem,” Shaul Olmert, co-founder and CEO of viral content platform Playbuzz, recently told Social Media & Marketing Daily. “Publishers initially banked on the click-through rate from Facebook resulting in people staying on their site longer … But that didn’t happen.”

From a consumer perspective, continuing to improve its user experience remains critical to Facebook’s success. “Facebook has proven why it remains so strong in this space,” Forrester analyst Erna Alfred Liousas recently told Social Media & Marketing Daily. “It continues to improve the user experience.”