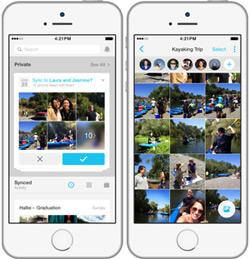 Moments will make social gatherings simpler for everyone, insists Will Ruben, product manager at Facebook.

“It’s hard to get the photos your friends have taken of you, and everyone always insists on taking that same group shot with multiple phones,” Ruben explains in a new blog post. “Even if you do end up getting some of your friends’ photos, it’s difficult to keep them all organized in one place on your phone.

Enter Moments, which will group friends’ photos on their respective phones based on when they were taken, and -- using facial recognition technology -- which friends are in them. Each user can then privately sync those photos with specific friends. They, in turn, can choose to sync their photos with the group. Moments will also keep each user’s synced photos organized, and ready for future searches.

Like a number of other experimental apps, Moments is a byproduct of Facebook’s Creative Labs. Other recent inventions to come out of Creative Labs include a caller-ID and business directory app named “Hello,” and Riff -- an app that lets friends collaborate on the creation short-form video.

Taken together, the apps are part of an effort by Facebook to embed itself more deeply into consumers’ mobile lives.

The number of mobile Facebook users worldwide will approach 1 billion this year, eMarketer estimates. And more than 70% of all Facebook users will use mobile this year. By 2018, more than three-quarters of the social network's audience will access it via mobile phones on a regular basis -- reaching 1.34 billion users.

Stateside, nearly 80% of Facebook users -- or 123.1 million consumers -- are expected to access the site regularly via mobile device this year, per eMarketer.

Overall, Facebook’s share of the $36.5 billion worldwide mobile ad spending is expected to reach 20.4%, this year, according to eMarketer.