Stars For A Day: Trump, Jeb Bush Take Over TV For Most Of Tuesday 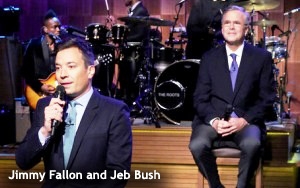 TV morphed yesterday from a morning dominated by chatter about Rachel Dolezal to an afternoon and evening starring two newly minted Republican candidates for president.

The two -- Jeb Bush and Donald Trump -- quickly pushed Dolezal’s self-identifying interview on “The Today Show” a couple of rungs down the TV news lists as Bush made the talk-show rounds and Trump announced his own candidacy.

In terms of TV-news attention, Trump was the clear winner. The man does attract attention, if often for the wrong reasons. For example, no sooner had he thrown his hat into the ring at a raucous event staged at Trump Tower in Manhattan as Neil Young’s “Rockin’ in the Free World” played in the background than Young himself complained via Mother Jones about Trump using his song. For the record, Young’s backing Vermont Sen. Bernie Sanders for president.

And of course, the outrageous statements emanating from Trump’s mouth, along with the manner in which he says them, were grist for the late-night comedy shows. “There’s a crazy person running for president!” exclaimed Jon Stewart on “The Daily Show.” Stewart then “thanked” Trump for “making my last six weeks my best six weeks!” Stewart is set to leave the show in August.

Bush, meanwhile, announced his candidacy a day earlier in Miami. But he was in New York on Tuesday for, among other things, an appearance on “The Tonight Show Starring Jimmy Fallon.” He participated in two segments -- a “Slow Jam The News” bit plus a sit-down interview with Jimmy.

In the interview, the two talked about Bush’s marriage and how he met his wife (he met her in Mexico when he was 17, and married her when he was 21), Bush’s feisty mother Barbara, and other small-talk topics.

The “Slow Jam” segment was every bit as raunchy as this bit usually gets. The way it works is, the guest-participant (who most often was Brian Williams before the scandal), makes a “straight” statement in the background, after which Jimmy responds with sexual double entendres -- all set to music provided by The Roots.

“He came from Texas,” went one of Fallon’s lines, “where everything is bigger, and turned Florida from a limp peninsula to a virile member of the U.S. economy.” To his credit, Bush took the bit in stride, never appeared to cringe or otherwise telegraph any regret for agreeing to participate in this R-rated comedy bit, and gave the positive impression that he “got” the joke and understood his role in it. Overall, his appearance on the “Fallon” show was an A+.

Earlier in the evening, but occurring after he taped the “Fallon” show, Bush turned up for a more serious appearance on a special live, one-hour episode of “Hannity” on Fox News Channel. He did well -- again -- although it’s also true that Fox News is somewhat of a comfort zone for a Republican candidate, especially one who is already emerging as a frontrunner for the party’s nomination.

For his part, Trump also turned up on Fox News Tuesday night, in an interview in his Trump Tower office with Bill O’Reilly. O’Reilly billed the interview as Trump’s “first post-announcement” interview. Curiously, ABC News made this same claim -- saying that an interview conducted by George Stephanopoulos in Trump’s office after the speech was Trump’s “first interview as a candidate.” When this kind of thing happens -- where two news organizations make the same “exclusivity” claim -- you can stop wondering why TV news has a credibility problem.

In their sit-down, O’Reilly tried to get Trump to clarify how he would actually achieve the goals he outlined rather vaguely in his speech earlier in the day on Tuesday. These included such prickly problems as how to fight ISIS and how to deal with Vladimir Putin. Trump insisted he would resolve both situations -- by exerting extreme military force on ISIS that we would not specify, and by dealing with Putin in the same shrewd way he makes deals in his real estate and development businesses.

Meanwhile, the headline on a number of Trump stories that appeared on Tuesday and Wednesday were all about an off-the-cuff comment he made, in the interview with Stephanopoulos, about wanting Oprah Winfrey to join him on the ticket as his vice presidential running mate.

Neither Winfrey’s or Neil Young’s or Jon Stewart’s reaction to that idea could be learned at press time.