NBC's Decision On Williams: Send Him Down To MSNBC 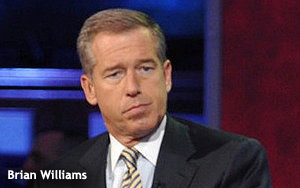 What do you do when your star player falters and you cannot keep him in the lineup any longer? If you’re a baseball manager, you send him down to the minors.

That’s one way of viewing the plan that NBC News has devised for dealing with its wayward anchorman, Brian Williams: Send him down to MSNBC.

The stories began to appear Wednesday evening: NBC would soon pronounce a final judgment on Williams, who is now four months into the six-month, unpaid suspension that NBC forced him to take in February following revelations that he lied about his experiences covering various stories for NBC News in hot spots such as Iraq and New Orleans in the aftermath of Katrina.

Whatever the “official” pronouncement would turn out to be, NBC News execs seemed to work overtime on Wednesday making sure their favored media outlets -- The New York Times, The Wall Street Journal, The Washington Post -- all got the details ahead of the press release.

The gist of the stories was this: Williams would remain at NBC, but he would not return to “The NBC Nightly News” nor enjoy his previous status as the network’s top news anchor. Some, but not all, of the stories suggested that Williams’ “new role” at NBC would have him working “primarily” at MSNBC in a role described in the Times story as “a breaking-news capacity.”

What could that be? He sits around waiting to be called upon in the event of “breaking news”? In cable news today, that phrase encompasses just about every story that gets covered every day, since the words “breaking news” are used on-screen almost all the time, whether news is “breaking” or not. If this is to be Williams’ new role, he will be busy indeed.

In the stories about Williams’ new posting to MSNBC, the suggestion is made that a role there -- anchoring reports on “breaking news” or perhaps hosting a newsmaker interview show either in prime time or afternoons -- could lead to the eventual “rehabilitation” of Williams’ tarnished public image.

Or to put it another way, if you place Williams in an environment such as MSNBC, he will be under a lot less scrutiny and a lot less pressure -- a situation in which he can get a chance to reset his career. And he may be able to do so for the simple reason that hardly anyone watches MSNBC, especially during the day but also mornings and evenings.

At one point in his stint as anchor at “Nightly News,” Williams was capable of drawing audiences of nearly 10 million viewers. At MSNBC, audiences in most dayparts are well south of half a million. It’s the perfect place for a former TV news superstar to try and launch a comeback, a place so unnoticed and insignificant that it will be almost as if Williams’ return will be shrouded in total secrecy.

Whatever he ends up doing, Williams is clearly suffering a demotion for his actions. One can suppose that he probably had the option of negotiating an exit from NBC entirely, but for whatever reasons -- financial or otherwise -- he and his representatives chose a scenario in which he remains employed, but has to swallow the indignity of a public demotion.

We still don’t really know what animated Williams to tell all those tall tales about himself in the first place, other than a Ted Baxter-type hubris that seems to overtake TV anchormen every once in a while. The fact is, Williams’ “crimes” were not sufficient to earn him a life sentence -- or in television terms, a lifetime ban from appearing on TV (although it’s also true that returning him to the network’s flagship newscast was out of the question).

Maybe he will find his voice, or a new one, on an MSNBC talk show he can call his own. I wish him luck because I always like a comeback story. Doesn’t everybody?

news, tv
3 comments about "NBC's Decision On Williams: Send Him Down To MSNBC ".
Check to receive email when comments are posted.
Read more comments >
Next story loading