Panera Celebrates 'Food As It Should Be' 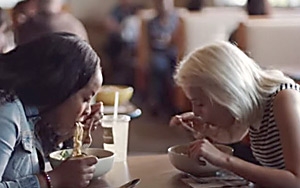 Panera Bread has launched a multichannel campaign themed “Food As It Should Be.”

The campaign, from Anomaly, seeks to underline that the restaurant chain’s long commitment to good, “clean” food, including moves such as early adoption of voluntary calorie posting and chicken raised without antibiotics, implementing animal welfare standards and removing artificial colors, flavors, sweeteners and preservatives from its food by the end of 2016.

The television ad creative — like a growing number of campaigns across categories (think Chobani’s new “Love This Life” campaign, for example) — uses vignettes of families, friends and couples having a great time in seemingly spontaneous scenarios … although they are all, of course, enjoying some sort of food or beverage from Panera.

The campaign’s anthem spot, which has pulled more than 250,000 views on YouTube in under a week, will also be shown in movie theaters across the country this summer.

The campaign includes digital and display content, billboards and radio advertising that began airing this week.

Consumers will be able to interact with campaign content via social media and MyPanera, and the campaign will also be featured on www.panerabread.com.

Last weekend, Panera ran a letter from CEO Ron Shaich in The New York Times and other national newspapers that spelled out the chain’s initiatives demonstrating its commitment to clean ingredients, a “transparent” menu and a positive impact on the food system. He also challenged consumers to “care,” “ask questions” and “demand transparency and cleaner menus.”

On June 17, the brand also invited the public into the Panera Pantry on Wooster Street in New York City to sample the menu and learn about Panera’s ingredients and food preparation methods through conversations with the brand’s culinary, baking and nutrition teams.

The event also featured Barnraiser, a community and movement founded by Eileen Gordon Chiarello, owner of a sustainable farm with her husband, TV host and chef Michael Chiarello. Panera is supporting this effort to scale sustainable food and farming.

ad campaign, food, restaurants, tv
1 comment about "Panera Celebrates 'Food As It Should Be'".
Check to receive email when comments are posted.
Next story loading