Magna reduced its outlook for global ad expansion this year by nearly a point and now expects it to grow by 3.9% to $513 billion (down from its previous forecast of a 4.8% expansion), marking a pronounced slowdown from 2014’s 4.9% rate of expansion.

“The nearly one point slowdown in 2015 is largely attributable to the absence of even-year events that generated extra ad spend in 2014,” Magna Director of Global Forecasting Vincent Letang notes in the report released early this morning. After factoring out the incremental effects of events such as the 2014 Winter Olympics Games, the U.S. mid-term elections and the FIFA World Cup tournament, Magna estimates 2015’s ad economy would be essentially flat with 2014.

ZenithOptimedia’s Barnard reduced his current outlook for 2015 to a 4.2% rate of growth, down by 0.2 point from the agency’s previous forecast of a 4.4% expansion in 2015. Barnard also reduced ZenithOptimedia’s long-term outlook for 2016 to +5.0%, down from his prior estimate of +5.3% -- citing the “strength of the U.S. dollar” and “a weakening in Latin America.”

The other big theme for both agencies is the continuing expansion of digital media, especially the mobile Internet, with an erosion of most traditional media. While the focus on digital will slow the expansion of television, TV will remain the dominant medium worldwide and in most markets for the foreseeable future.

“2015 is a tipping point in the long-term shift from traditional to digital media,” notes Letang in Magna’s just-released report. “Last year’s global advertising growth (+4.9%) was the combination of digital media growing +18.5% while traditional media revenues were essentially flat (+0.5%). This year, traditional media ad revenues will decrease globally (-0.8%) for the first time since the 2008-2009 recession, as the low growth of television and out-of-home ad sales will no longer offset the fast decline of print (-6.5%), challenged by a diversified family of digital media categories (+15.9%). Beyond the slowdown caused by the absence of global events in 2015, we believe digital media has reached a stage," Letang says in the report, "where it starts to compete more directly with traditional TV budgets.”

According to ZenithOptimedia, the current trend line will make the Internet the biggest medium in 12 key markets by 2017, although it will remain in second place behind TV globally. By 2017, ZenithOptimedia predicts there will be only four points separating the global market shares of ad spending between the two media.

The agency cited mobile Internet browsing and applications as the main driver in digital’s rapid ascension, predicting that mobile “will contribute 70% of all global ad spend growth between 2014 and 2017.” 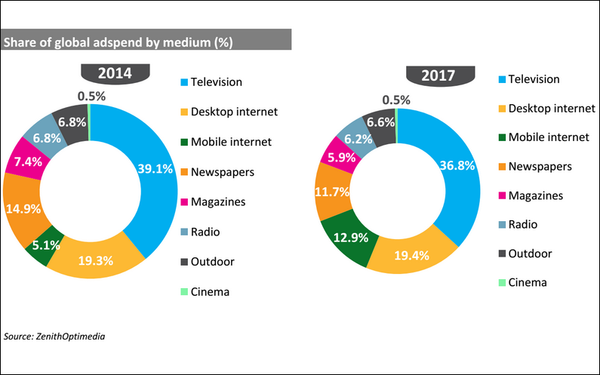