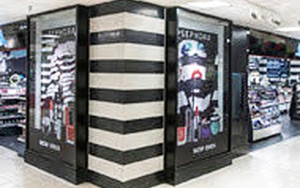 With retailers hustling to up their beauty game, consumers are busy changing their shopping channels. While Walmart and Target are still the favorites, slightly fewer people shopped there for makeup and grooming products, while more shifted to the pricier options at department stores.

New research from the Integer Group and M/A/R/C reports that 42.5% of total beauty shoppers headed to mass retailers last year, an eyelash or two lower than 43.7% the prior year.

But in something of a surprise in the ongoing study — and despite significant efforts from both Target and Walmart to expand higher-priced assortments in the beauty aisle — “mass-tige” isn’t quite catching on. Instead, shoppers are increasingly turning to higher-priced channels for beauty needs. Some 7.6% say they shop at department stores, up from 2.5% in the previous year, the biggest gain of any channel this year. And 7.4% chose specialty stores, compared with 6.6% the year before; 3.5% shopped at clubs, compared to 2.4% in 2013. Amazon’s popularity is also gaining, with 3.2% of the survey using it for beauty brands, compared with 1.6% the year before.

The percentage of shoppers buying beauty products from grocery and dollar stores both declined.

That news comes at a time when retailers are aggressively wooing more beauty sales. JCPenney, for example, has stepped up its expansion of Sephora units within its stores, and is adding 25 new locations to the 500 it already operates. Macy’s recently acquired Blue Mercury, the fast-growing luxury beauty retailer, and in addition to keeping its 60 stand-alone stores, is incorporating its offerings into its stores. And Kohl’s, which has long lagged on beauty updates, has announced the first major changes to its beauty lineup in more than a decade, targeting it as one of the pillars in its “Greatness” turnaround agenda.

In 2014, NPD Group reports that the U.S. prestige beauty business grew 3% to $11.2 billion. Sales of mass brands, according to Nielsen, were flat.