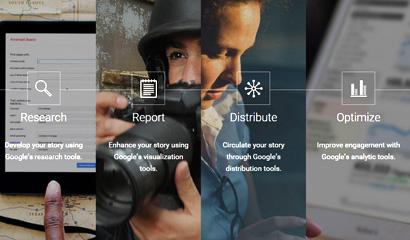 Google wants to teach the world how to tell more compelling stories through journalism and advertising, so the company built a "newsroom" to house data and other resources like tutorials and best practices on how to use its products, as well as provide access to the recently updated Google Trends service. It also showcases efforts around new media partnerships, and citizen reporting on YouTube. All this quietly speaks to search engine optimization (SEO) techniques to boost rankings in search engine query results for content.

News Lab builds on a series of Google's announcements made last week to support content. Partnerships like the one with Storyful to roll out YouTube Newswire, a venture to curate and aggregate feeds containing daily newsworthy events published to YouTube. The company also announced a series of initiatives aimed at supporting and verifying news video feeds on YouTube such as WITNESS Media Lab, and The First Draft Collection.

The focus on storytelling is not new for Google. Founders Larry Page and Sergey Brin continually speak about indexing all the world's information and how building better ads that tell a story will solve many of the advertising industry's problems, such as ad blocking browser-based plug-ins. One brand marketer has always found the tools in Labs to be a "little short on value and they are kind of clunky to do things at mass scale."

Nonetheless, the focus for News Labs pulls in Google Maps and Google Earth to show and tell the story by highlighting the location where the event occurred. It's a way for the Mountain View, Calif. company to exploit its tools and services for use in journalism and advertising or content creation similar to the way Twitter, Facebook and other social sites drove media and advertising agencies to incorporate tweets and posts, respectively.

Google also said offers new programs focused on the future of media. The company's partnership with San Francisco media startup accelerator Matter, as well as Hacks/Hackers, a community group built for both developers and the people who write about them highlights that push.

Searchmetrics estimates much higher query ratings for newsworthy content in the future after seeing an algorithm update last week. The site ranks the top domains related to news, magazines and newspapers, and other media with the Dict.cc, fortune.com, and bizjournal.com experiencing the biggest change, for better or worse.

Google's focus on storytelling also seems to have prompted an announcement from Microsoft Bing, which gave its video search engine a much needed makeover. The new site features larger, easier-to-identify video thumbnails, with an option to preview videos from the results by hovering over the results to watch a short snippet of the video.